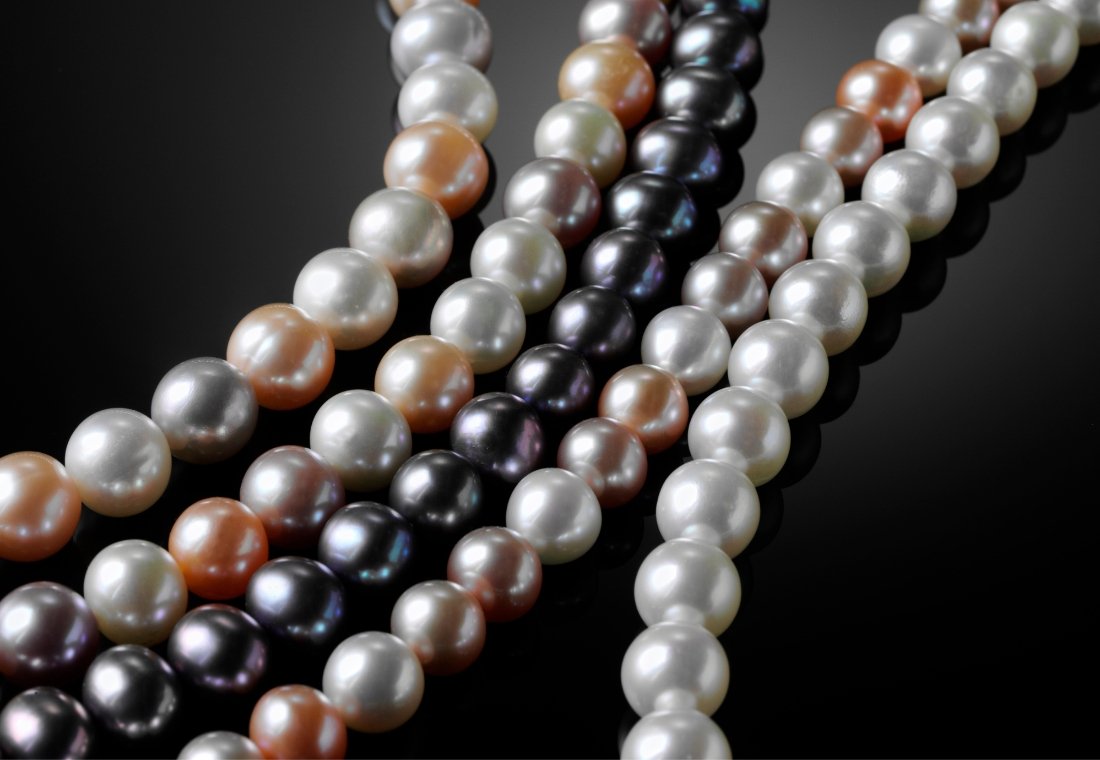 Pearls come in various types and each has its unique beauty and appeal. However, with all the varieties available on the market, choosing the right one can be difficult. This guide will provide you with extensive information on the different types of pearls.

In the world of organic gemstones, there are two main types of pearls – natural and cultured. Both types are real gemstones, but the way they were formed makes them different.

Natural pearls are those naturally formed within the soft tissue of living shelled molluscs such as mussels and oysters. When a microscopic irritant finds its way into the mollusc, the animal combats it by building up layers of nacre which consists of calcium carbonate (aragonite) and conchiolin, a complex protein forming mollusc shells.

Cultured pearls, on the other hand, are genuine pearls formed within the soft tissue of living shelled molluscs, acquired through farming and harvesting processes. The main difference is that the microscopic irritant finds its way into the mollusc by getting embedded into the animal with human assistance. As in nature, the creature coats the irritant with nacre, creating a pearl.

It is worth mentioning that natural and cultured pearls are identical in composition and appearance. The difference is their origin, rarity and price, with naturals being extremely rare and expensive. That is the reason why most of the pearls available on the market today are cultured.

According to the sources they come from, pearls, both natural and cultured, can be subdivided into saltwater and freshwater categories.

Saltwater pearls are formed in oysters living in oceans and are usually harvested in Indonesia, the Philippines, Australia, China, Japan, French Polynesia and the South Pacific Islands. Saltwater pearl oysters can be cultivated in volcanic atolls and protected lagoons. This type of pearl takes longer to form; however, they have a better lustre, meaning they are of higher quality than freshwater pearls. The downside is that saltwater pearls are more expensive and can be less durable.

Freshwater pearls are formed in various types of freshwater mussels living in lakes, rivers, ponds and other sources of freshwater. They are commonly harvested in China, Japan, Australia, India and the United States. This type of pearl is much more affordable and takes shorter to form; however, they are not as lustrous and smaller than saltwater pearls.

Saltwater pearls come in three main varieties and are commonly known to have a better quality than freshwater pearls, reflected in their higher demand and price. The most common varieties include Akoya pearls, South Sea pearls and Tahitian pearls.

Akoya pearls are typically thought of as gems having a perfect spherical shape and high lustre. They hail from the seas around Japan, China, Korea and Vietnam and are formed by small Pinctada fucata oysters, also known as Akoya pearl oysters. The small size of the oysters means that they can produce 1-2 pearls at a time and the limited production increases the value of these gems.

The Akoya pearl was the first variety of pearls to be cultivated in Japan in the early 20th century. Before this, pearls were rare and expensive. Today, Akoya pearls are the most abundant saltwater pearls, with the ones coming from Japan being the best. The highest quality Akoya pearls originating from Japan are called Hanadama Akoya, “flower pearls” in Japanese.

Akoya pearls have highly desirable white, grey, cream and blue body colour with silver, pink and green overtones and range in size from 2mm to 10mm. They are commonly perfectly round in shape, although irregular-shaped Akoya pearls can also be found.

South Sea pearls often called the Queen of Pearls, are probably the most sought-after variety of all pearl types. They are cultivated in Australia, the Philippines, Myanmar (Burma) and Indonesia and are formed by the Pinctada maxima oysters, which are the largest pearl oysters in the world. The high failure rate in the cultivation process makes these types of pearls one of the most valuable pearls available on the market.

The South Sea pearl comes in a gorgeous palette of white and golden colours, with various overtones including pink, green and blue. They can be found in sizes ranging from 8mm to 20mm, with the average size being 12mm.

South Sea pearls are highly prized for their satin-like lustre, elegant appearance and size. Since most of these pearls are irregular in shape, perfectly spherical specimens command very high prices.

Tahitian pearls are valued for their array of colours and mirror-like lustre. They come from French Polynesia and are produced by the black-lipped Pinctada margaritifera oyster, which is found exclusively in Tahiti and other French Polynesian islands. They are among the most sought-after and valuable gems, as often, less than 10% of the Tahitian pearl harvest results in sellable pearls.

Tahitian pearls are rare naturally dark gemstones. They display mysterious colours such as black, dark grey, charcoal, peacock green, aubergine with silver, lavender and blue overtones. They can generally be found in sizes ranging from 8mm to 14mm but can grow as large as 21mm.

Tahitian pearls come in a variety of shapes, with round specimens being the most expensive and sought-after. It is worth mentioning that Tahitian pearls are the only type with an internationally accepted standard of quality. A true Tahitian pearl should have at least 0.8mm nacre thickness to qualify for export from Tahiti.

Freshwater pearls are usually produced by Hyriopsis cumingii molluscs, also known as triangle shell mussels, living in lakes, rivers, ponds and other sources of freshwater. A single freshwater pearl mussel can produce up to 40-45 pearls at a time.

The history of freshwater pearl cultivation traces back to the 13th century when the earliest blister pearls were cultured in China. However, it was not until the mid-1990s that people started producing high-quality pearls. Most of the freshwater pearls available on the market today are cultured in China, and a small percentage of them are grown in Japan, Australia, India and the United States.

Unlike saltwater cultured pearls, most freshwater cultured pearls have irregular shapes such as oval, baroque and semi-baroque, because they are created by inserting a small donor tissue from a mussel into the harvesting mussel instead of using a bead nucleus. The resulting pearl, composed of an entirely solid nacre, is more durable and less prone to chipping.

Since freshwater pearls are grown and harvested in a shorter period, they do not have enough time to grow large. However, the growth period varies from farm to farm, meaning these pearls have the widest size range from 2mm to 15mm.

Freshwater pearls usually come in white and cream body colours with pink, cream, peach and lavender overtones. They are also known to display strong orient, which is a shimmer of iridescent rainbow colours. Black and chocolate freshwater pearls can also be found, but their colour is received through colour treatment.

Freshwater pearls are much more affordable because they are not as lustrous as saltwater pearls. However, with the advancement of cultivation techniques, Chinese pearl farmers were able to produce large, perfectly round pearls with mirror-like lustre. Yet, these top-quality freshwater pearls make up less than 1% of total production.

Apart from saltwater and freshwater pearls, there are unique types of pearls that are identified based on the way they are formed.

Keshi pearls, also known as poppy seed pearls or seed pearls, can be either saltwater or freshwater, and they are unique due to their formation process. These pearls can be produced in many ways, including when the irritant placed in the mollusc is rejected before the pearl is fully formed and when the nucleus fractures and the pearl sacs continue to grow without it, resulting in widely irregular shapes. Since these pearls grow without nuclei, they are small, only growing to a few millimetres in size.

Poppy seed pearls are composed entirely of solid nacre and are desired for their high lustre enhanced by the irregular shapes. They come in a variety of colours and shades, including white, cream and lavender.

It is worth mentioning that Keshi pearls are not considered real pearls, as their formation process is an accident rather than a pattern, and, with the advancement of pearl farming techniques, Keshi pearls are becoming rarer.

Mabe pearls, also known as blister pearls, half-pearls and composite pearls, can be either saltwater or freshwater, and they are unique due to their shape as they are flat at the back and spherical when viewed from the front.

To get Mabe pearls, farmers fix a semi-circular-shaped irritant to the inside of the shell instead of placing it inside the mollusc’s body. As the pearl forms, the front grows in a dome shape while the back remains flat as it is fixed to the shell.

Mabe pearls come in a range of colours, with white and golden being the main and having a beautiful lustre. The reason such pearls are in demand is that they give a look of luxurious and expensive South Sea pearls at a fraction of the price. Also, such pearls are comfortable to wear as pendants, earrings and brooches as they sit close to the body.