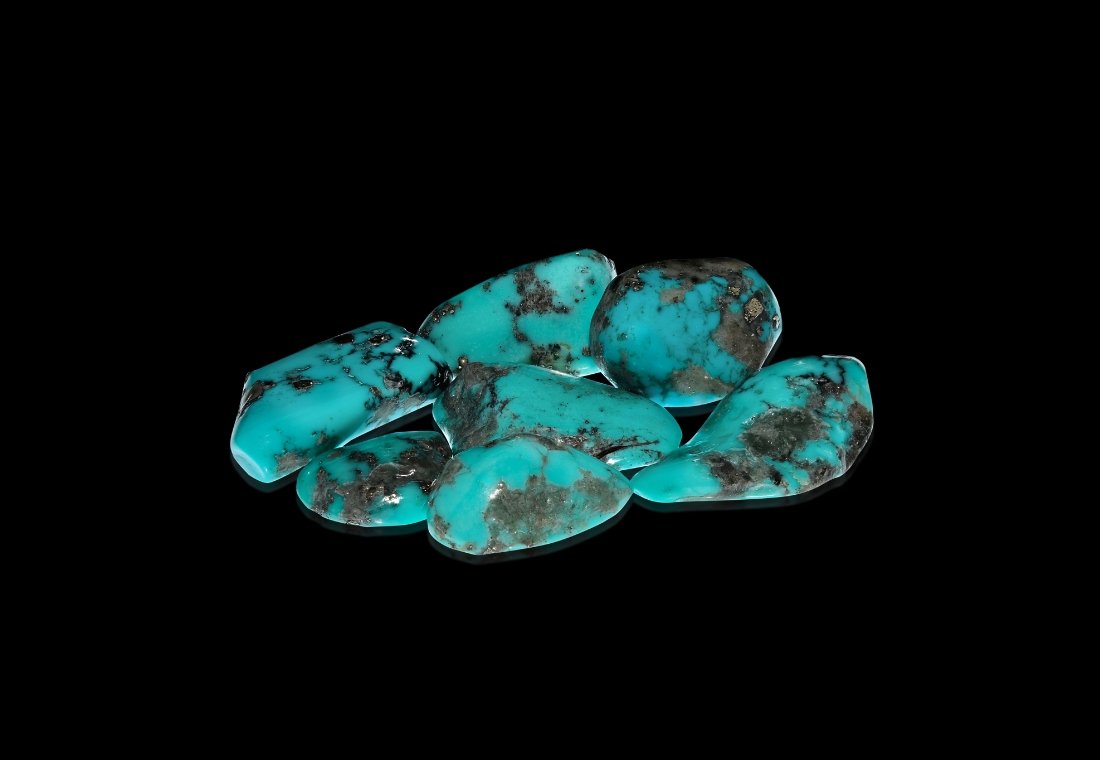 Turquoise, one of the world’s most ancient gems, is the birthstone of December, along with tanzanite, blue zircon and lapis lazuli. It was used as a jewellery gemstone by ancient rulers and has long been considered a symbol of good fortune and protection from evil.

Turquoise is a sky-blue to grass-green semitranslucent to opaque mineral with brown, dark grey or black veins of other minerals or the host rock. The name of the gemstone comes from the Old French word “turqueise”, meaning “Turkish”, as it first entered Western Europe through Asia Minor. The gem also gives the name of the slightly greenish blue colour that we recognise as turquoise.

Turquoise has been used as a jewellery gemstone and an ornamental material for thousands of years. The ancient Egyptians treasured it for decorative and superstitious purposes as they believed that the colour blue was a symbol of regeneration. Tibetans believed in the healing properties of turquoise, while the Chinese carved it into beautiful ornaments and small sculptures.

Turquoise forms when acidic, copper-rich groundwater seeps downwards through soil and rock and reacts with minerals that contain tiny amounts of aluminium and phosphorus. This sedimentary process forms a porous, semitranslucent to opaque compound of hydrous phosphate of copper and aluminum.

Turquoise usually forms in iron-rich limonite or sandstone, which creates dark brown and yellowish-brown markings. These markings appear as a matrix within the stone and create various patterns such as veins, spiderwebs, patches, etc.

It is worth mentioning that turquoise rarely appears as well-formed crystals. Instead, it is usually an aggregate of microcrystals which have greater durability and get polished to a higher lustre when packed closely together.

Turquoise forms in dry and barren regions, which explains the geography of its sources. The top colour turquoise spices come from the Nishapur district of Iran. Other turquoise sources include Afghanistan, Argentina, Australia, Brazil, China, Kenya, Mexico and the southwestern United States.

Turquoise is a unique gemstone that has a colour named after it. It comes in shades of blue and green, from sky blue to medium-toned and bright blue to dull green and grass green.

Departure from the blue colour in turquoise is caused by tiny amounts of iron in the gem’s structure. Depending on the iron concentration, turquoise gets various shades of green. The colour change can also be caused by small amounts of zinc substituting for copper in the structure.

The most sought-after turquoise colour is an even, intense, medium blue, referred to as robin’s egg blue in the trade. The traditional source for this top colour is the Nishapur district of Iran, which is why it is also described as “Persian blue”. The green to greenish-blue specimens are generally less valuable; however, some green shades are getting more popular in contemporary jewellery designs.

Turquoise is a semitranslucent to opaque gemstone that exhibits a waxy to matte lustre.

Pure blue turquoise is very rare. It is often mottled and interspersed by dark, sparse or dense veins. These veins are either the host rock or other minerals and range in colour from yellowish-brown to dark brown and black. Turquoise that contains veins is referred to as a matrix. The specimen that includes fine seams of a matrix is known as spiderweb turquoise. A heavy matrix is less desirable.

Turquoise is mainly cut en cabochon as the smoothly rounded shape highlights the gem’s colour, texture, and matrix if present. In addition, turquoise is popular in round or oblong beads used for necklaces and bracelets. Top-colour material can also be engraved with inscriptions and inlaid with gold.

Turquoise is a porous and relatively soft mineral, ranking 5 to 6 on the Mohs scale of hardness, which is why you should take special care to prevent damage and maintain its colour and lustre.

Remove your turquoise jewellery before physical activities or household cleaning, as it can be damaged by other harder materials and acids. Additionally, turquoise is sensitive to prolonged direct sunlight, perfume, cosmetics and even perspiration which can cause discolouration and breakage.

To clean turquoise at home, use mild dishwashing soap and warm water. Soak your jewellery for about 10 – 15 minutes, and use a soft toothbrush to remove the dirt. Next, rinse out your piece with clean water and dry it with a soft and lint-free cloth. Turquoise should never be cleaned with ultrasonic and steam cleaners as it is a heat-sensitive gemstone, and if exposed to extreme heat, it changes colour to green.

When storing turquoise jewellery, keep it separated from other gemstones to protect it from scratches. Storing your jewellery in individual cloth bags is always a good idea.