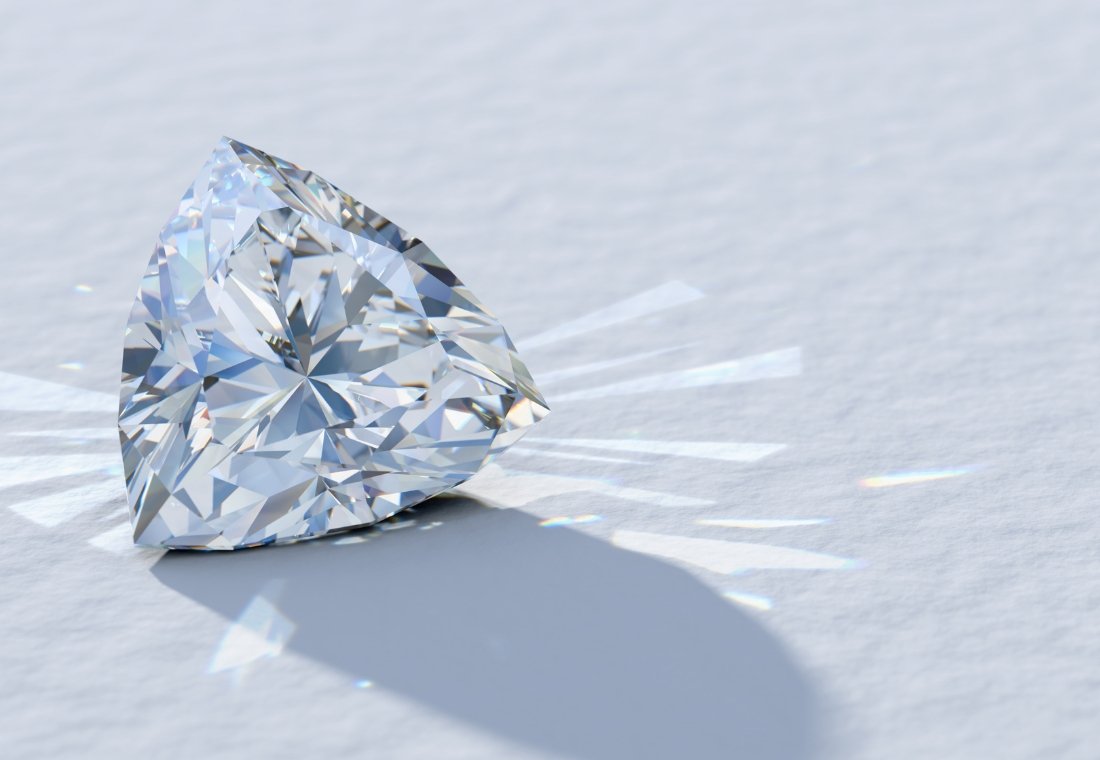 The trillion is a popular cut for accent stones in many jewellery designs. However, it is also a beautiful alternative to traditional diamond cuts working as a centre stone for those looking for personalization. If you are interested in buying a diamond with a unique shape, proportions and symmetry, this trillion cut diamond guide is a must-read.

Although the trillion cut may seem to have a contemporary design, its history traces back to 18th-century Amsterdam when the Asscher brothers developed the initial triangular cut.

Inspired by the initial cut and antique triangular cuts, such as old mine triangular, briolette and others, as well as the modern brilliant cut facet pattern, Leon Finker created his version of the triangular brilliant cut in the mid-1960s and called it the trillion cut. However, he initially neither tried to trademark the name nor apply for a patent, despite the popularity of his cut. By the time Finker tried to protect his creation in the late 1970s, the cut had become so popular that the term “trillion” was applied to any triangular cut diamond.

In 1978, Finker finally patented the cut, but he was unable to register a trademark because a federal judge ruled that the word was very close to “trilliant”, a term used by Henry Meyer Diamond Company, which was cutting their version of triangular brilliant diamonds. In 1991, Finker trademarked a new name “Trielle”, but his patent on the original triangular brilliant cut had almost expired by this time.

Today, trillion cut diamonds are most often used as accent stones to complement larger centre stones in jewellery designs; however, they also make a beautiful option in solitaire jewellery pieces, such as stud earrings, pendants and engagement rings.

As a unique shape, the trillion cut has both positive and negative features. However, its cons should not stop you, as they can be easily worked around.

Being derived from the brilliant cut, trillion cut diamonds are known for having impressive brilliance and fire, meaning they are also good at hiding colour and inclusions.

Trillion cut diamonds look larger than round or princess cut diamonds of the same carat. The reason for this is that trillion diamonds have a shallow cut and large face-up area. However, keep in mind that the trillion cut, like all the other cuts, has certain cut standards. This means you should not opt for extremely shallow stones because the depth of the diamond will not be enough to make the light reflect properly.

Trillion cut diamonds are exposed to chipping at their pointed ends, especially if you happen to handle such a diamond unmounted. However, if the stone is properly set in its mounting, this potential problem should never be a concern.

Trillion diamonds require special attention to prongs. Because of their non-standard shape, such stones need secure prongs to protect the tips from chipping and breaking. It is highly recommended to have your trillion cut diamond set in V-prong. This type of prong will wrap the tips and protect them from possible damage. In the case of choosing the classic prong setting, make sure the prongs are large enough to cover the tips to avoid the risk of chipping.

Trillion cut diamonds need extra cleaning since they have less depth compared to the round and princess cuts. Because of its shallow cut, the sparkle of a trillion cut diamond can be easily dimmed by even a little dust or dirt. This means you will need to clean it more frequently to enjoy its brilliance and sparkle.

Unlike round diamonds, trillion cut stones do not have any specific guidelines for excellent cut quality. The GIA (Gemological Institute of America) does not provide cut grading for trillion cut diamonds due to their complex and unique structure. This means your choice should be dictated by your personal preferences and some key features.

The cut parameters below will serve as a general guideline in evaluating the cut quality of trillion cut diamonds:

The facets on the right and left halves of the stone should have the same shape and size. All the points of the facets should meet, and there should not be missing or extra ones. The more symmetrical the facets, the more beautiful the stone. Also, make sure the stone is not too shallow because a too spready cut will diminish the beauty of the stone. In addition, it is recommended to opt for a stone with an H colour or higher and an SI clarity grade or better.