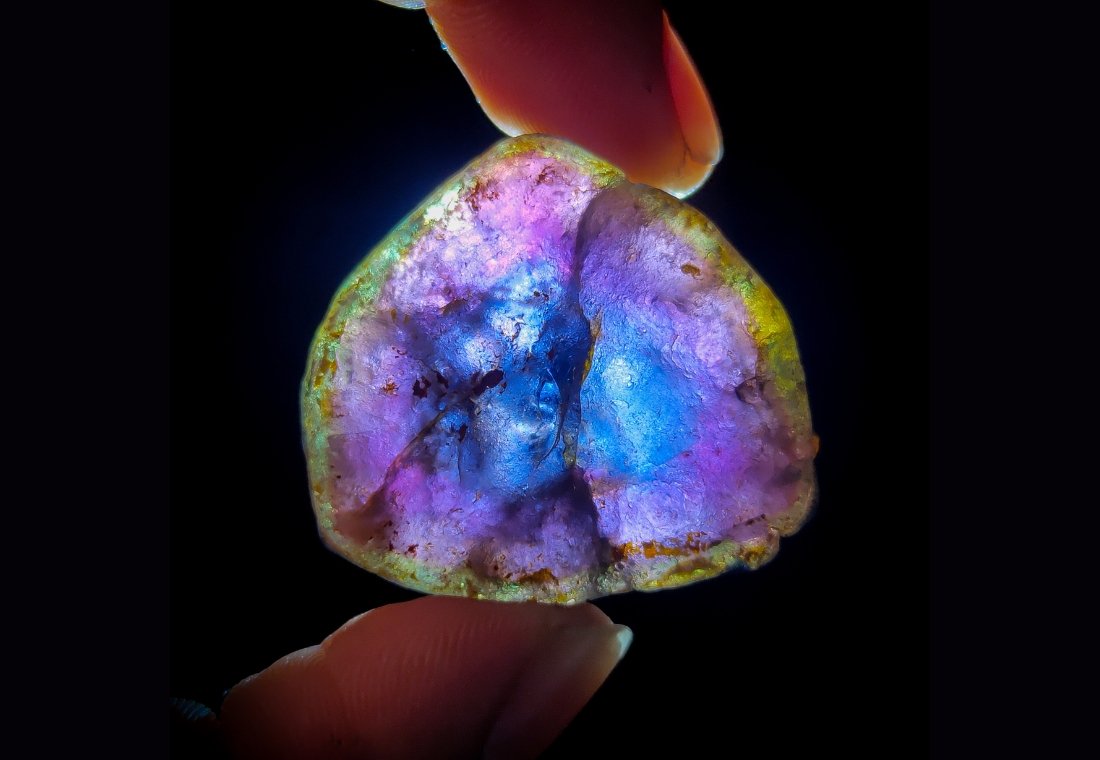 Tourmaline is one of the unique gemstones that can be found in all colours of the rainbow.  This beautiful semi-precious stone occurs in more colours and colour combinations than any other mineral group and can be found on all of the world’s continents.

The name tourmaline comes from the Sinhalese word “turamali”, which means “stone with various colours”. It refers to a large group of boron silicate minerals, which have a common crystal structure and similar physical properties but vary in chemical composition.

Tourmaline has been known since ancient times. People were mining and cutting these gemstones for centuries; however, because of their variety of colours, they have often been mistaken for other gems. It was not until the 1800s that scientists identified tourmalines as a particular type of mineral.

Most tourmaline crystal varieties were formed by hydrothermal activity when hot water and vapour carried the elements required to form tourmalines into cracks in rocks. Tourmaline crystals from minute to massive are usually found in ancient igneous rocks formed by cooling magma.

Tourmalines are mined in different ways according to the type of their source. In the case of primary sources, they are mined directly out of the vein by careful blasting or digging. If the source is alluvial, meaning the crystals are away from their formation place because of weathering and erosion, the gems are collected from river beds or beaches by hand.

Being the national gemstone of the United States, tourmaline was mainly mined in the US until the early 1900s. While they can be found on all of the world’s continents, the most significant sources today are Brazil’s Bahia and Minas Gerais. Tourmaline deposits can also be found in Afghanistan, Australia, Myanmar, Malawi, India, Italy, Madagascar, Mozambique, Namibia, Nepal, Nigeria, Pakistan, Russia, Sri Lanka, Switzerland, Tanzania, Zimbabwe, Zambia and Zaire.

Tourmaline gemstones occur in more colours and colour combinations than any other gem. They are divided into several species, schorl, elbaite, liddicoatite, uvite and dravite being the major, and are further divided into varieties depending on their colour, which is influenced by the chemical composition of the gem.

Since tourmalines have a large variety of colours, they are usually traded under colour-specific names. For example, pink-red stones are called rubellite, blue-green – paraiba,  blue – indicolite and multicoloured ones are called watermelon tourmalines. Descriptive names such as yellow tourmaline or pink tourmaline are also used for fancy-coloured gemstones.

Most gem tourmalines are elbaites which include rubellite (ranging from pink to red), indicolite (from light blue to dark tones), verdelite (green) and achroite (colourless). Green is the most common colour of transparent tourmalines. They are coloured by dispersed ions of iron in conjunction with iron-titanium charge transfer.

Chrome tourmaline is a variety of green tourmalines that has vivid green colouring due to trace amounts of chromium and vanadium. Dark-toned green stones, which are more common in the marketplace, can appear almost black from certain angles. These stones are described as oily or olive green. Liddicoatite tourmalines offer a diverse array of colours from pink, red and blue to brown and white. These gems are rich in calcium, lithium and aluminium. It is worth mentioning that liddicoatite was not recognized as a separate tourmaline variety until 1977. Uvite is a very rare form of tourmaline that occurs in green and reddish-brown colours. This type is rich in calcium, magnesium and aluminium. Dravite is rich in magnesium, sodium and aluminium and is characterised by colours ranging from yellow and orange to dark brown. Schorl is the most common tourmaline species making up to 90% of all tourmalines found in nature. This type is rich in iron and typically occurs in black, sometimes with blue or brown tints.

Most tourmalines display two or more colours in a single stone or two shades of the same colour. These gems are called bi-coloured or parti-coloured tourmalines. The variety of tourmalines that exhibit green on one end and pink-red on the other are called watermelon tourmalines.

Paraiba tourmalines, named after the region in Brazil, where they were discovered in the 1980s, appear in a wide range of greenish-blue, bluish-green, green, blue and violet shades. There are many terms to describe the quality of paraiba tourmalines, such as “electric”, “turquoise”, “sapphire”, “mint” green and “tanzanite” blue.

Because of the environment tourmalines grow, they are often included. The level of inclusions typically depends on the type of gemstones, meaning some tourmaline colours are more included than others.

Inclusions are much more visible in light-tone stones as they do not have strong and attractive colours to mask the flaws. Such gems are usually cut into cabochons to emphasize the colour and minimize the appearance of the inclusions. For the other colours, the more visible any inclusions are, the less the stone costs.

Because of the elongated crystal shape, tourmalines are often cut into long rectangular bars. However, these gemstones also come in many traditional and fancy shapes.

Most tourmalines exhibit strong pleochroism, which is the ability of the crystals to show different colours depending on the angle from which they are viewed. Cutting pleochroic tourmalines is a highly skilled art.

Tourmaline prices range from a few dollars for the most common varieties to very high prices for rare examples.

The price per carat of large-size tourmalines is considerably high. However, it is worth mentioning that these spectacular sizes are very rare.  In general, the price per carat increases significantly as the gem passes the 5-carat milestone.

Bright red, blue and green varieties are among the most valuable gems. Electric green to blue tourmaline, also known as paraiba, is the most valuable class due to its unique internal glow, which is attributed to trace amounts of copper in a gem’s chemical composition. Another premium-priced tourmaline variety is the chrome tourmaline which gets its colour from traces of chromium.

As a general rule, it is recommended to buy coloured gemstones such as tourmalines by size and not by carat weight. Tourmalines vary in size-to-weight ratio, so some stones look larger while others look smaller but have greater carat weight in comparison.

Tourmaline is a hard and durable gemstone, 7 – 7.5 on the Mohs hardness scale. While it is an excellent jewellery gemstone resistant to both scratching and breaking, it requires some care to be protected from accidental hits and changes in temperature. Tourmaline is sensitive to heat. High temperatures can alter its colour, and sudden temperature changes can even cause fracturing.

Although these gems are in the upper levels on the hardness scale, it is recommended to remove your tourmaline jewellery before exercising, cleaning or other physical activity since it can still be scratched by other harder materials.

To clean tourmalines at home, use mild dishwashing soap and warm water. Carefully place your gemstones in the liquid you have prepared and soak them for about 20 – 30 minutes. This will help to loosen the dirt. After soaking, use a soft toothbrush to remove the dirt. Next, rinse out your piece of jewellery with clean water and dry it with a soft and lint-free cloth.

The use of steam and ultrasonic cleaners is not recommended.