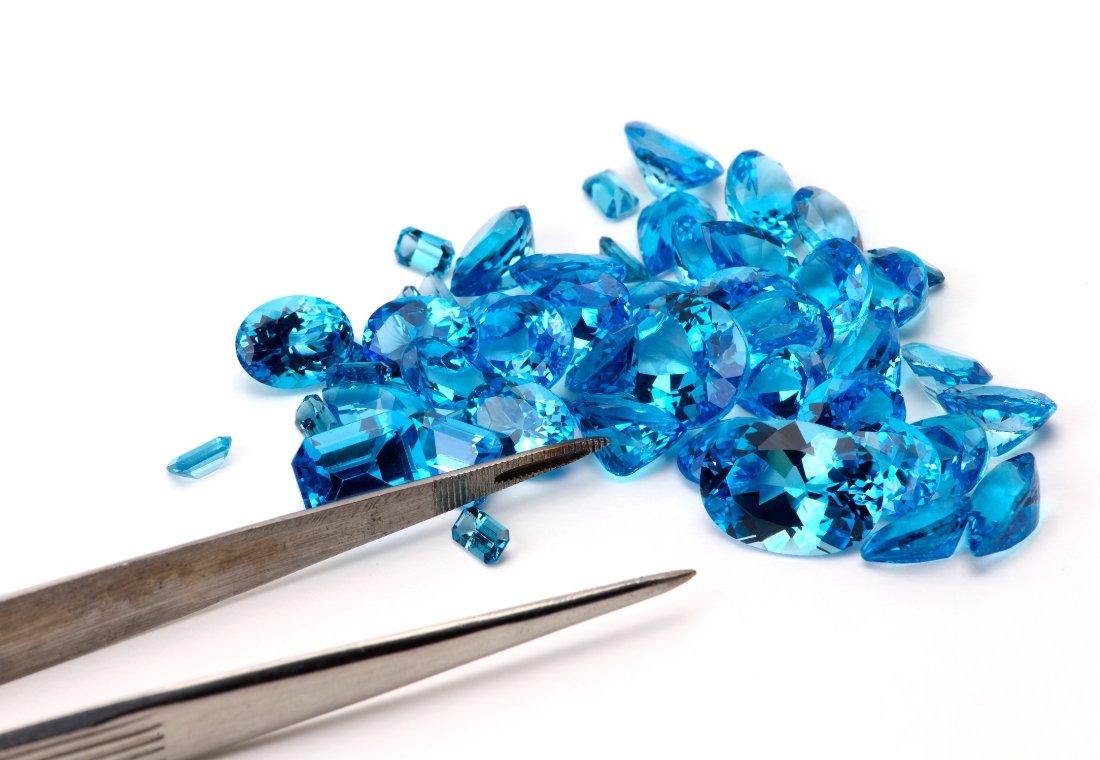 Topaz, the traditional birthstone of November, has been associated with opulence and abundance for centuries. It is a beautiful semi-precious gemstone that comes in various colours and endless shades. Let’s discover a gem that can be an affordable addition to your jewellery collection, suitable for daily wear.

The name topaz either comes from the Greek island of Topázos in the Red Sea where it was mined or the Sanskrit word “tapas”, meaning heat or fire.

Topaz was formed millions of years under the earth’s crust. When molten lava or magma cools, it becomes igneous rock, which evolves into granite, pegmatite, basalt or other rock types. These rocks usually have cavities and cracks where get minerals such as fluorite and cassiterite. Such mineral combination gives us topaz.

It is really hard to trace the history of this gemstone because there was confusion over its identity. In olden times, all yellowish gems were referred to as topaz no matter what mineral they had been. However, by the 18th century, scientists had been able to identify topaz properties and sort them out from other yellow gemstones.

Today gem-quality topaz can be found all over the world, the most notable sources being south and south-east Asia, central Europe, north and central America, southern Africa, Australia and Brazil.

Topaz comes in a wide range of colours from colourless and pale yellow to pink, orange, red, brown, violet, blue and green. The rarest and the most expensive topaz colour ranges from golden yellow to pink-orange, known as imperial topaz or precious topaz.

The most popular colour of topaz is blue, including any shade from pale blue to deep blue. However, blue topaz is extremely rare in nature, and nearly all blue topaz available on the market is the result of heat treatment and irradiation. The most sought-after blue shades are lightly coloured “Swiss blue” and darker “London blue”. Other less-known topaz colours are honeyed brown “Sherry topaz”, colourless “silver topaz” and “white topaz”, as well as gems with artificially produced rainbow effects known as “azotic topaz” and “mystic topaz”.

The colour evaluation of topaz has three main components: hue, saturation and tone. The hue is the main colour of the stone, and it can be red, yellow, blue, etc. There can also be a secondary hue such as gold, orange, green, violet, etc., meaning a topaz can be described as greenish-yellow, for example. Saturation describes the intensity of the colour. Finally, tone defines how light or dark the colour is. For example, the London blue topaz may be described as a very dark blue topaz.

Topaz is one of the rare gemstones that have a high level of clarity. Most gems available on the market are eye clean, meaning they do not have visible impurities and flaws. Topaz is a natural gemstone, and it has inclusions, but they are visible only under magnification. In fact, some of the largest flawless gems ever unearthed are topaz.

Topaz is a versatile gemstone. It usually has high clarity and a good hardness of 8 on the Mohs scale, meaning it can be cut into almost any shape. The only thing to consider is if the gem is cut properly to exhibit the maximum amount of brilliance.

The gem is easy to find in larger carat weights, but as with most coloured gemstones, it is recommended to choose a stone based on its actual size (millimetres) rather than carats to see what you are getting.

As with all other gemstones, topaz’s price is based on its colour, clarity, cut and carat weight.

Although Swiss blue and London blue are the most sought-after topaz colours, they are also among mass-produced gem varieties and are not expensive as a result.

The rarest and the most expensive is the imperial topaz, which typically comes untreated and makes less than 1% of all gem-quality topaz, while the pink variety of imperial topaz commands the highest prices.

Topaz is a durable semi-precious gemstone, 8 on the Mohs hardness scale, meaning it is hard enough to survive scratches and accidental hits. However, you may want to take special care to prevent such abuse. That is why it is always recommended to remove your topaz jewellery before physical activities or household cleaning, as this gem can be damaged by other harder materials and surfaces.

To clean topaz at home, use mild dishwashing soap and warm water. Carefully place your gemstone in the liquid you have prepared and soak it for 20-30 minutes. It will help to loosen any dirt. After the soaking, use a soft toothbrush to remove the dirt. Next, rinse out your piece of jewellery with clean water and dry it with a soft and lint-free cloth.

When storing topaz jewellery, keep it separated from other softer gemstones to protect them from being scratched. Similarly, you will want to protect your topaz from harder gems such as diamonds and sapphires, meaning it is a good idea to store topaz in individual cloth jewellery bags.