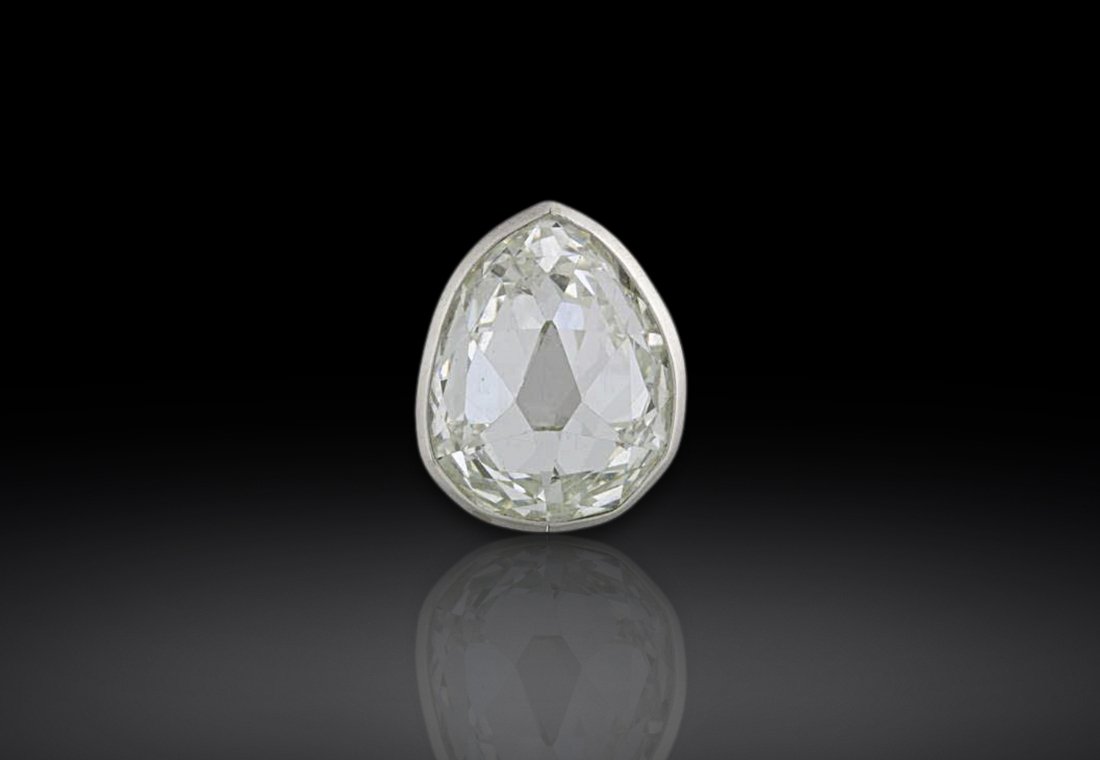 The Sancy Diamond – A Colourful History

The Sancy Diamond is one of the most famous historical gemstones that has travelled through the hands of numerous kings and queens and at least 15 countries in Europe. Despite being rumoured to carry a curse, it was believed to grant powers of invincibility to those who wore it as jewellery.

Origin of the Sancy Diamond

The history of the Sancy Diamond, also known as the Grand Sancy Diamond, traces back to 14th-century India. Some believe that the diamond originated from Persia, where it was owned by the Mughal Empire; however, considering the period, India was the only source of diamonds in the World.

According to legend, the diamond has been smuggled out of India in the late 14th century by a Venetian diamond cutter. That is why the first recorded evidence of the existence of the Sancy Diamond in Europe is in the dowry inventory of Valentina Visconti, the daughter of the Duke of Milan, in 1389. According to the description, at the time, the diamond weighed over 100 carats.

Valentina Visconti married Louis I, Duke of Orleans, brother of King Charles VI of France, who was murdered by Burgundians in 1407. After her husband’s death, Valentina used the Sancy to obtain funds to finance the struggle by the Armagnac against the Burgundians. Following the Armagnac defeat, the diamond fell into the hands of Duke John the Fearless (1371 – 1419) and remained with several generations of the Dukes of Burgundy until it reached Charles the Bold (1433 – 1477).

The Sancy Diamond was believed to bring good luck and grant powers of invincibility to the Dukes of Burgundy, which is why they carried it into battles, always ending up victorious. However, the diamond was lost in the Battle of Grandson in 1476, and misfortune followed after this, with Charles losing two battles against the Swiss.

Later it turned out that the diamond was not lost but hidden away by the Bishop of Basel along with another famous jewel, the Three Brothers, which featured three red spinels arranged around a central diamond. In almost 14 years, the two jewels were sold to Jacob Fugger, who got the Sancy cut to its present weight of 55.23 carats. The unusual diamond was also noticeable for having symmetrical facets and no pavilion, with two crowns placed on top of one another.

In the early 16th century, the Sancy Diamond was sold to King Manuel I of Portugal, also known as the Fortunate, in exchange for northern European exclusivity for pepper contracts from Portugal’s colonies. In the inventory prepared after the King’s death in 1521, the diamond was listed as a jewel weighing 11.046 grams, equivalent to 55.23 carats.

The Sancy remained a part of the Portuguese Crown Jewels until 1580, when Philip II of Spain invaded Portugal to assert his right as an heir to the throne against Antonio de Crato. De Crato was defeated and escaped with most of the crown jewels to Paris.

Later intending to obtain help from either France or England to get his lost throne back, Antonio sold some of the crown jewels to King Henry III of France and the others to Queen Elizabeth I of England. The Sancy was sold to the Queen, who later decided to pawn it to get funds to finance a military campaign to assist the Dutch in their struggle for independence from Spain.

The Sancy Diamond, pawned to Francesco Rodriguez in Antwerp, was never redeemed. It found its way to the Netherlands, where it was sold to a well-known jewellery collector, Nicholas Harlay de Sancy, after whom the diamond was named, in 1592. Later, when Harlay de Sancy visited England on an official mission, the Queen wanted to buy the diamond out, but her offer was politely refused.

Eventually, the Sancy Diamond returned to England when Harlay de Sancy was in dire financial straits and sold it to King James I of England in 1604.

After the death of James I in March 1625, the Sancy Diamond, along with other crown jewels, was inherited by his son Charles I of England and presented to his wife Henrietta Maria as a wedding gift. However, in about a year, the Sancy and other crown jewels were pawned in Amsterdam when King Charles I needed funds for war efforts against Spain and France.

In the 1630s, the jewels were redeemed, but the continued conflicts between Charles I and his Parlament led to a serious confrontation which made Queen Henrietta go to Holland to pawn crown jewels, including the Sancy and raise funds for her husband in case of a possible outbreak of war. On June 14, 1645, a full-scale war broke out, and despite his wife’s support, Charles’ forces suffered defeat after defeat. Eventually, Charles I was captured in 1647 and sentenced to death in January 1649.

After the death of Charles I, the Prime Minister of France Cardinal Mazarine took over Henrietta’s debts, redeemed the crown jewels, took possession of the gems with the Queen’s consent and bequeathed them to Louis XIV, King of France. Later the Sancy passed to Louis XV, King of France from 1715 to 1774, and to his grandson Louis XVI who was the last king of France in the line of Bourbon monarchs.

Modern History of the Sancy Diamond

In 1792, the French crown jewels, including the Sancy, the Regent and the Hope Diamond, were stolen from the royal treasury in Paris.

According to some historians, the Sancy Diamond was recovered and sold to the Spanish Crown’s Minister, Manuel de Godoy; however, this fact has never been confirmed. The Sancy is also believed to have owned the Queen of Spain until the arrival of Joseph Bonaparte. The gemstone reappeared only after 20 years in Florence, where it was sold to Prince Demidov of Russia in 1828.

According to other historians, the Sancy has never been recovered but reappeared in 1828 and was sold to a Russian nobleman of the Demidov dynasty Pavel Nikolaievich Demidov for £80,000. The gemstone remained in the Demidov family collection up to 1865 when sold to an Indian entrepreneur, Sir Jamsetee Jeejeebhoy, for approximately £100,000. Two years later, the gem was displayed by a French jeweller G Bapst with a price tag of 1,000,000 French francs.

In 1906, the Sancy Diamond was purchased by Viscount William Astor, 1st Viscount Astor, as a wedding gift when his son Waldorf Astor married Nancy Langhorne. Viscountess Astor often wore the gem in a tiara on state occasions. After the death of Lady Astor in 1964, the pale yellow diamond was inherited by her son and remained in the family for 72 years until the Louvre Museum purchased the shield-shaped gem for $1 million in 1978.

Today the Sancy Diamond rests in the Apollo Gallery, an area dedicated to King Louis XVI.