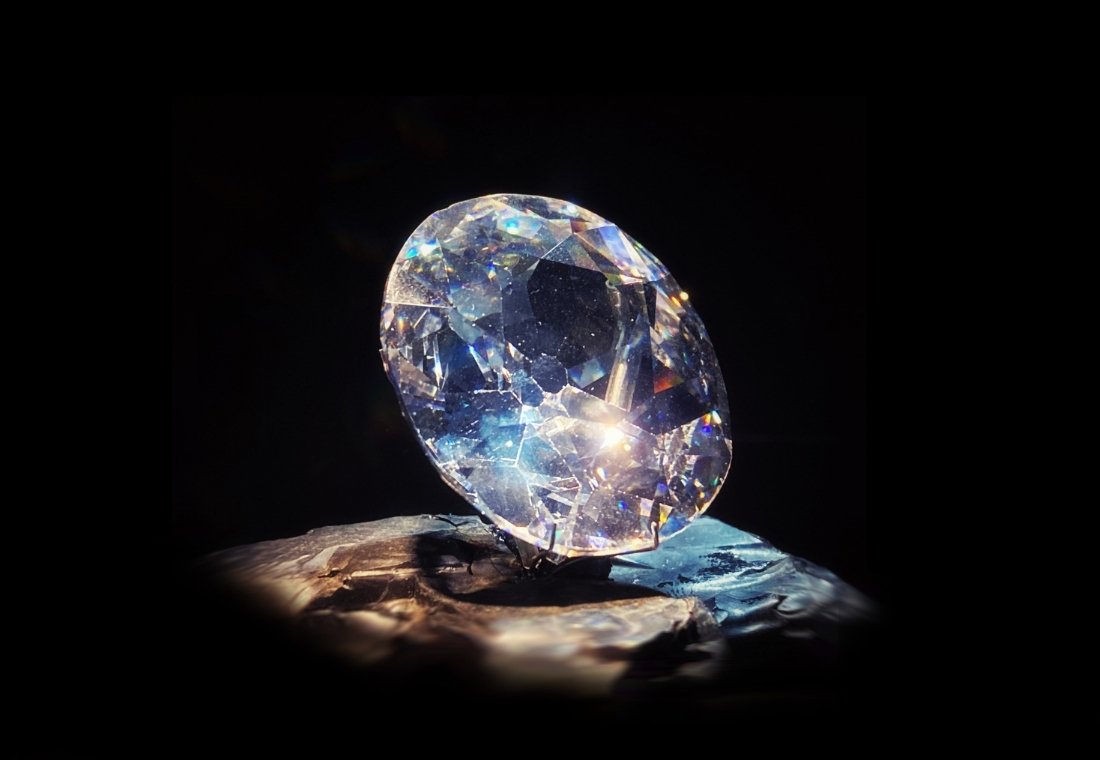 Some diamonds hold more than glitz and fame. Sometimes they hold mystery and misfortune. One of these gems surrounded by evil stories is the Koh-i-Noor Diamond, infamous for attracting bad luck to its owners. Let’s discover the fascinating story of this gorgeous gemstone and the sinister tales it holds.

The Koh-i-Noor and The Gemstone Throne

The Koh-i-Noor Diamond, “Mountain of Light” in Persian, is believed to be mined in Golconda, India thousands of years ago. Like all diamonds of the time, the Koh-i-Noor came from alluvial mines in India and shifted from the sand. Until the discovery of diamond mines in Brazil in 1725, most diamonds, instead of being mined, were sieved and extracted as natural crystals from the soft sands of riverbeds. Although most alluvial diamonds are small in size, large specimens such as Koh-i-Noor can sometimes be found.

The first mention of this stone appears in the memoirs of the founder of the Mughal Empire, Zahiruddin Muhammad Babur. In 1526 Turco-Mongol leaders came from Central Asia to occupy India and establish the Islamic Mughal Empire and a new era of obsession with gemstones.

Although it is impossible to tell where the diamond exactly came from and when it first came into the Mughal’s possession, there is a moment at which the gem appears in the written record. In 1628, Mughal ruler Shah Jahan ordered a gemstone-encrusted throne inspired by the throne of the Hebrew king Solomon. The throne took seven years to make, and it cost four times as much as the Taj Mahal, which was also under construction. Among rubies, garnets, emeralds, pearls, diamonds, and other precious stones adorning the throne were two enormous gems: the Koh-i-Noor Diamond and the Timur Ruby.

At that time and for a century after the creation of the throne, the Mughal Empire was the wealthiest state in Asia. However, that prosperity attracted the attention of other rulers in Central Asia. In 1739 Persian ruler Nader Shah invaded the capital of the Mughal Empire, Dheli and left the city accompanied by gold and precious gemstones. According to records, he took 700 elephants, 4,000 camels and 12,000 horses to pull the treasures, including the throne. He removed the Koh-i-NoorDiamond and the Timur Ruby to wear on an armband.

Throughout history, the Koh-i-Noor would pass between the hands of various rulers in one bloody battle after another. With all the fighting between Hindu, Persian, Mongolian, Afghan and Sikh rulers, a power vacuum grew in India, which attracted the British, who came to take advantage of it.

The Koh-i-Noor and the British Crown

In 1813 the Koh-i-Noor returned to India and came into possession of Sikh ruler Ranjit Singh. The ruler had the ultimate affection for diamonds. They were not just beautiful gemstones to him but symbols of prestige and power. If the British could own the jewel of India and the country itself, it would symbolize their power and superiority. It was a diamond worth fighting for. That is why when they learned of Ranjit Singh’s death in 1839 and the plan to give his jewellery collection to a sect of Hindu priests, the British took steps to get the diamond.

After Ranjit Singh’s death, the throne passed between four rulers over four years. At the end of the chaotic period, the only people left in line for the throne were a young boy, Duleep Singh, and his mother. In 1849, after imprisoning the mother, the British made Duleep sign a legal document amending the Treaty of Lahore that required the 10-year-old boy to give away the Koh-i-Noor and all claims to sovereignty. Since then, the diamond came into the possession of Queen Victoria.

The D colour, Type IIa gemstone was displayed at the 1851 Great Exposition in London to show the public how simple it was. Many people could not believe it was so valuable and compared it to a piece of glass. Disappointed with such feedback, Prince Albert, Queen Victoria’s husband, had the stone recut and polished to make it more brilliant. The process reduced the size of the jewel by half.

The Curse of the Koh-i-Noor Diamond

The myths and the mystery surrounding the Koh-i-Noor Diamond are quite controversial. According to folklore, he who owns the Koh-i-Noor will own the world but will also know many misfortunes. Only God or woman can wear it with impunity.

Part of the reason this gemstone is “cursed” is how it was gained from a 10-year-old boy. The powerful took things from the less powerful. But what is the moral distinction between stuff taken by force and objects taken during the colonial conquest? The legal ownership of post-colonial collections is a big topic. It is an especially sensitive subject if the rulers who once owned these treasures headed nations that no longer exist.

The UK has retained ownership of the diamond, regardless of calls for its return. Being one of the largest diamonds in the world and weighing 105.6 carats, the gem is set as one of the jewels within a British monarchy crown and is kept at the Tower of London Jewel House.