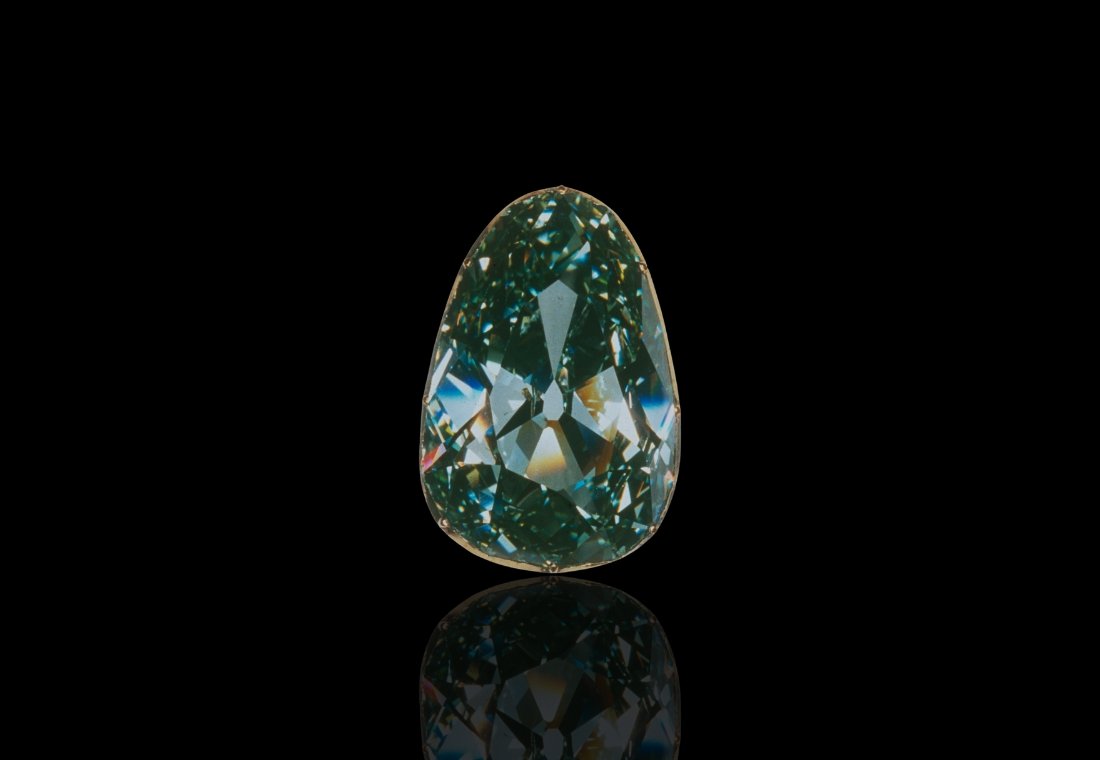 The Dresden Green Diamond – A Symbol of Good Luck

The Dresden Green Diamond is the largest and finest natural green diamond ever discovered, with a rich history tracing back to the 18th century. Like many of the world’s famous diamonds, the gem is accompanied by rumours that never cease to intrigue and attract.

The History of the Dresden Green Diamond

The history of the Dresden Green Diamond, also known as Dresden Green, which derives its name from Dresden, the capital of Saxony in Germany, traces back to early 18th century India where it was most likely discovered in the Kollur mines, near Golconda.

The diamond, possibly in the rough, was purchased by famous London-based diamond merchant Marcus Moses, who later brought it to the attention of George I, the King of Great Britain and Ireland, from 1714 until 1727.

The earliest report on the Dresden Green Diamond appeared in a London newspaper called the Post Boy, published on October 25th, 1722. The edition included an article reporting that the large green diamond was offered for sale to King George for £10,000.

Four years later, the next mention of the Dresden Green appeared in a letter written by Baron Gautier of Dresden to Le Coq, then Polish Ambassador to London in 1726. In his letter, Gautier said that the green diamond was offered to Frederick Augustus I for £30,000, a noted connoisseur and collector of jewels and the creator of the Green Vault (Grünes Gewölbe) at Dresden Castle for the storage of his treasures. Despite Marcus Moses’ efforts, neither monarch seize the opportunity to purchase the gem.

Later, Moses sold the diamond to Dutch merchant Delles, who, in turn, sold the Dresden Green to the son of Frederick Augustus I, Frederick Augustus II of Saxony, at the Leipzig Annual Fair in 1741. The actual purchase price of 400,000 thalers, an unimaginably high sum at the time, was revealed in a letter to Frederick the Great.

Frederick Augustus II assigned his court jeweller, Johann Melchior Dinglinger, to incorporate the green diamond in the decoration of the badge of the Order of the Golden Fleece, later dismantled for unknown reasons. In 1746, the Dresden Green was remounted into a new Golden Fleece, featuring two famous diamonds, the Dresden Green and the Dresden White, a 49.71-carat cushion-shaped diamond. This task was completed by Genoan master goldsmith André Jacques Pallard.

With the outbreak of the Seven Years’ War (1756–1763), which is widely considered to be the first global conflict in history, the treasures of the Green Vault were relocated to the Königstein Fortress the Southeast Dresden. With the conclusion of the war, the entire collection returned to the Green Vault, and Pollard’s Golden Fleece got dismantled. In 1768 Prague jeweller Diessbach set the intact section holding the Dresden Green into a hat ornament, along with two large colourless diamonds and many smaller stones. This setting is the one that survived up to this day.

The Green Vault was open to the public until World War II. However, in 1942, the treasures were again relocated to the Königstein Fortress for safekeeping, so they escaped the massive bombing raids in Dresden.

At the conclusion of World War II, this area of Germany was under the Red Army occupation, and the Soviet Trophies Commission moved the treasures of the Green Vault to Moscow, returning them safely to the New Green Vault in 1958. Dresden Green Diamond remains in its permanent home to this day and can be viewed along with many other magnificent treasures.

From October 13, 2000, to January 17, 2001, the Dresden Green was displayed in the Harry Winston Gallery of Geology at the Smithsonian Institution, alongside the Hope Diamond. From November 25, 2019, to January 03, 2020, the diamond was on loan as part of the special exhibition “Making Marvels: Science and Splendour at the Courts of Europe” at the Metropolitan Museum of Art in New York.

In November 1988, the Dresden Green was examined by a senior staff member of the Gemological Institute of America (GIA). The diamond was estimated to weigh approximately 41 carats, measuring 29.75 x 19.88 x 10.29 mm. The weight remains approximate because the diamond could not be removed from the historical mounting without risk of damage. The gem’s colour was described as fancy green, while the shape and the cutting style as modified pear-shaped brilliant.

As for clarity, the diamond got a VS1 grade, although it is potentially internally flawless, meaning the flaws are near or on the outer surface, and a slight recutting could remove them.

In general, the green colour in diamonds is the result of exposure to radiation in the earth which forms radiation-induced colour centres. Natural radiation is typically two types: alpha or betta, and they have a limited penetrating ability, which is the reason most green diamonds have only a thin “skin” of colour. Saturated green body colour can only be produced by highly-penetrating radiation such as gamma or neutron, which is extremely rare in nature.

For a diamond to get a saturated green body colour, it must remain close to a gamma or neutron source for millions of years without being exposed to excessive heat. These are very rare conditions, meaning the colour of the Dresden Green Diamond is truly unique.

The rare Type IIa chemical composition, along with its amazing transparency and unusual colour, make the Dresden Green of the greatest diamonds in the world.