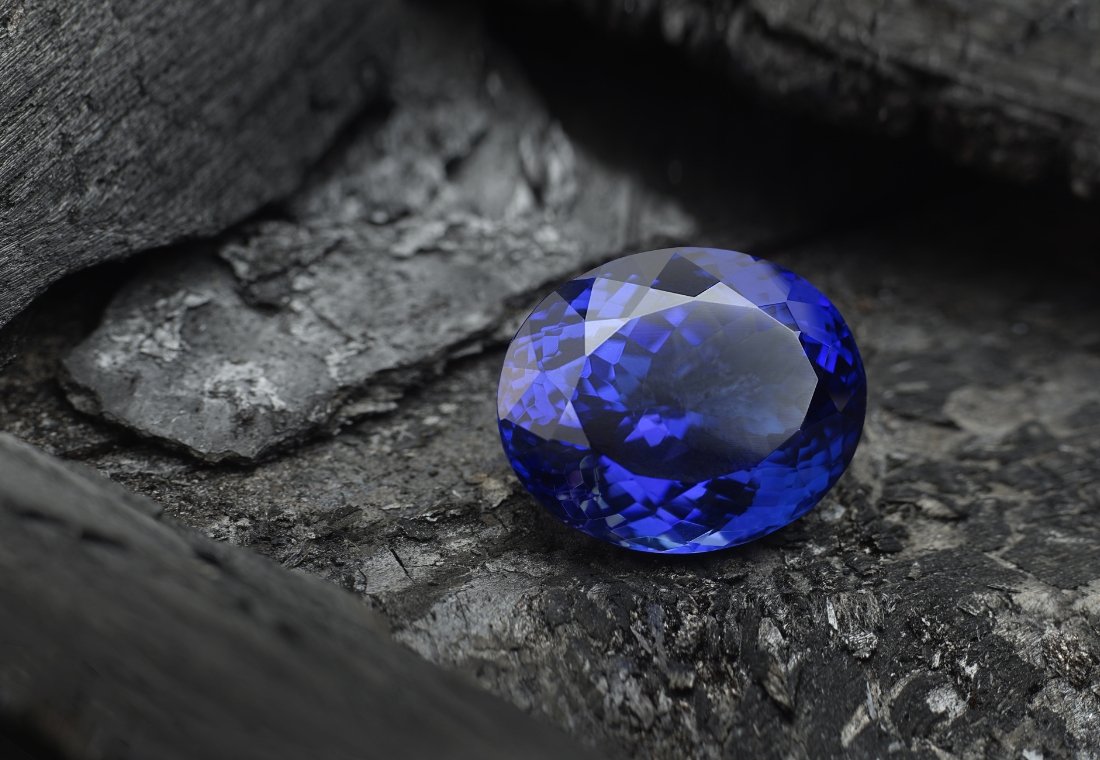 A relative newcomer to the world of gemstones, tanzanite is one of the birthstones of December, along with turquoise and zircon. It was one of the most exciting discoveries of the 20th century declared to be the most beautiful gemstone found in 2000 years.

Tanzanite is the violet-blue to a blue-violet variety of the mineral zoisite. It is a relatively recent discovery in the world of coloured gemstones mined commercially only in Tanzania.

Tanzanite crystals were formed sometime in the earth’s geological past in the area around Mount Kilimanjaro when two shelves of ingenious rocks containing mineral-rich magma were forced together. The movement of continental plates mixed and combined minerals and produced tanzanite. What is unique in the case of this semi-precious gemstone is that some minerals from one plate do not contain in another one. That is why tanzanite is only found in a small location in Tanzania near Mount Kilimanjaro in the Merelani Hills (Mererani) and nowhere else.

The most commonly believed story is that Massai herdsmen were tending their cattle in the hills of northern Tanzania near Mount Kilimanjaro when they noticed the glow of transparent blue stones in 1967. They took the stones to a local amateur gemologist, Manuel de Souza, who initially thought he had sapphires in his hands. However, he dismissed this idea after testing the hardness of the gemstones.

De Souza consulted the only reference book on mineralogy in his possession and decided that stones were olivine. He registered the sample as such because of the Tanzanian law that required prospectors to specify the minerals before registering a mining claim. Soon de Souza realized it was not olivine, but still had troubles with the actual identity. Some said it was cordierite, others argued dumortierite. That is why he sent samples to the Gemological Insitute of America (GIA). However, it was one of the Tanzanian government geologists, Ian McCloud, who identified the mysterious gemstone as a rare blue variety of zoisite.

In 1968, when Tiffany & Co became the main distributor of blue zoisite, the vice president of the company, Henry Platt, coined the name tanzanite in reference to its country of origin. Tanzanite has instantly become a popular gemstone highly appreciated by gem professionals, jewellery designers and collectors.

Tanzanite is a unique gemstone that comes in violet-blue to a blue-violet colour and has a beautiful array of shades varying from light almost sky blue to a deep midnight blue with flashes of red and touches of violet and purple.

The appearance of this gemstone is influenced by its pleochroism, which is the ability of a gem to show different colours when viewed in different directions. Tanzanite’s pleochroic colours are red-violet, deep blue and yellow-green. Since the yellow-green colour is not that desirable, most gems undergo heat treatment.

As with other coloured gemstones, the more vivid and saturated tanzanite is, the higher its value. Top-quality tanzanite has violetish blue colour or a dominant violet hue. A higher saturation is always desired, meaning the deeper the colour, the better. And finally, darker stones are more valuable, but dark gems without strong colouring are not highly rated.

The exact face-up colour depends on the colour of the original rough, its size, pleochroic colours and the light the fashioned gem is viewed under. As a general rule, cool lighting emphasizes tanzanite’s blue, while warm lighting makes it appear violet to purple.

Tanzanite is an eye-clean gemstone, meaning it is usually free of inclusions and blemishes to the naked eye. That is why any specimens with visible inclusions devalue considerably.

Because of its pleochroism, tanzanite’s cut plays an important role in colour display. This means that the cutting direction determines the finished gem’s face-up colour. To emphasize the violet-to-purple colour, cutters usually waste less rough than while getting a violetish blue colour. That is one of the reasons why violet-purple tanzanites are more plentiful than strong blue colour stones.

Tanzanite is available in a wide range of sizes and shapes, with cushion and oval being the most common. The highly sought-after colours are usually seen in gemstones over 5 carats, and smaller gems are often less saturated.

Tanzanite is a relatively durable semi-precious gemstone, 6.5 – 7 on the Mohs hardness scale, meaning it is hard enough to survive accidental hits. However, you should always remove your tanzanite jewellery before physical activities or household cleaning since this gem can be damaged by other harder materials and acids.

To clean tanzanite at home, add some mild dishwashing soap liquid in warm water. Stir the water and dish soap together using a spoon or your finger. Carefully place the gemstone in the liquid you have prepared and soak it for about 10 – 15 minutes. This will help to loosen any dirt. After the soaking, use a soft toothbrush to remove the dirt. Next, rinse out your piece of jewellery with clean water and dry it with a soft and lint-free cloth.

Always remember that tanzanite is sensitive to extreme heat and sudden temperature changes, which is why you should avoid ultrasonic and steam cleaners.

When storing tanzanite jewellery, keep it separated from other softer gemstones to protect them from being scratched. Similarly, you will want to protect your tanzanites from harder gemstones such as diamonds and sapphires. This means it is a good idea to store tanzanite in individual cloth jewellery bags.

Where to Buy Tanzanite

Tanzanite is a highly appreciated gemstone among collectors and gem lovers, making it a sought-after addition to any jewellery collection. If you are a connoisseur looking for a reliable tanzanite source to buy from, we recommend Woow Me Jewel, a Tanzania-based jewellery company.

Founded almost a decade ago, Woow Me Jewel has worked exclusively with a team of gemstone-enthusiastic Tanzanian women and youth. They source their gemstones uniquely from Tanzania Women miners through TWiMMI (Tanzania Women in Mining & Mineral Industry), ensuring their gems are responsibly mined and traceable to the source.

At Woow Me Jewel, you can find a wide selection of tanzanite in a beautiful array of shades of violet-blue. Every gemstone is cut by a skilled lapidarist, ensuring Woow Me gems reveal the hidden beauty of Africa’s most magnificent stones.