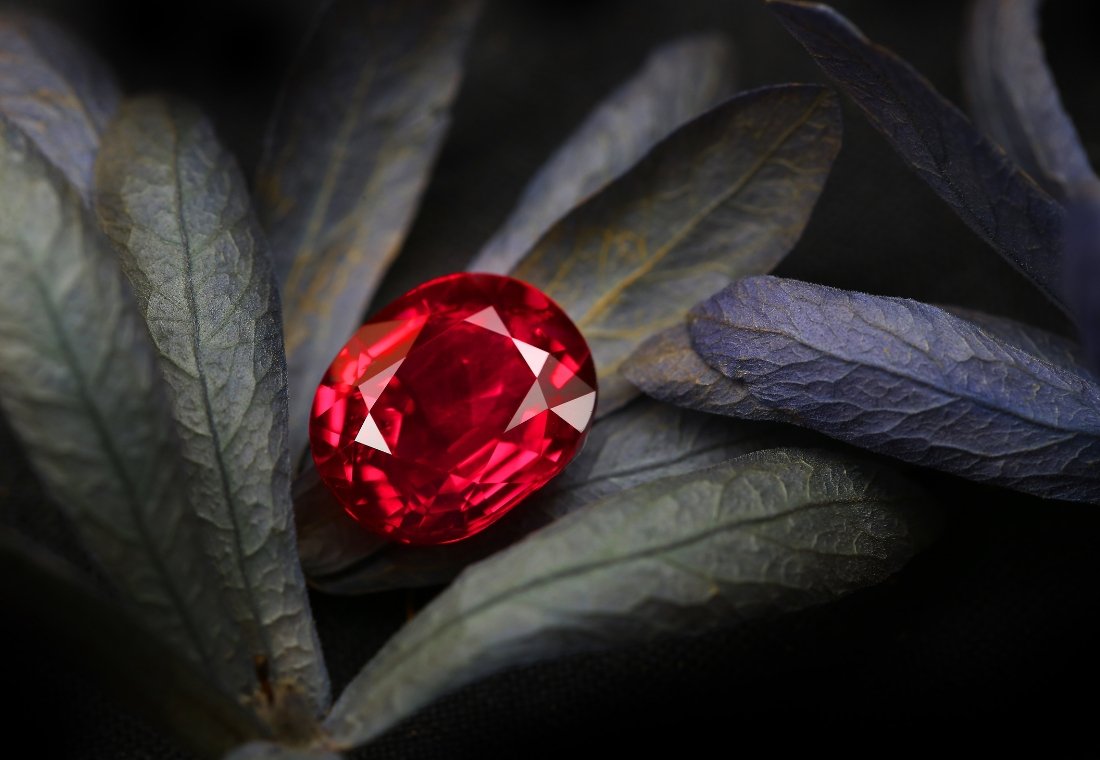 Ruby is one of the four recognized precious gemstones, along with emerald, sapphire and diamond. Being the birthstone of July, it is one of the highest-valued coloured gems admired since history began.

The English name “ruby” comes from the Latin word “ruber” and “rubeus”, meaning red. In the ancient Indian language of Sanskrit, ruby is called “ratnaraj”, which translates as “king of precious stones”. Interestingly, in ancient times before technological advancement, all red gemstones were considered rubies, including spinel, garnet and tourmaline.

Rubies were formed under immense pressure and intense heat under the earth’s surface for millions of years. They consist of oxygen atoms called corundum and aluminium, which turn into liquid under heat and pressure and seep into cracks in igneous or metamorphic rocks. When the liquid cools, it usually turns into colourless crystals. However, when minuscule traces of other minerals mix with corundum, they turn it into reds, pinks, blues and yellows.

If the microelement is chromium, then the corundum turns red, and we get rubies. In the case of iron and titanium, we get blue sapphires.

Colour is the most important quality factor of rubies. To figure out which ruby colour is the best, we need to consider three components – hue, tonal grade and saturation.

Hue describes the type of red, meaning how red is the gemstone and if there are any signs of other colours such as blue, brown or yellow. As a rule, the redder the stone, the better.

Tonal grade refers to the level of lightness or darkness of the red. The best rubies have a solid colour that is not too dark and not too light. When the colour of rubies is too light, they are classified as pink sapphires, but the line between pinkish-red rubies and pink sapphires is so fine that people can argue for hours over when a ruby stops being ruby and becomes a pink sapphire.

Saturation refers to the intensity of the colour. This characteristic defines if the gem has weak, vivid, strong or intense colouring. The most desirable and sought-after ruby colours are strong pure red and red with a hint of blue, also known as pigeon’s blood, usually sourced in Myanmar (Burma).

Natural rubies typically display inclusions, which are not looked upon as negative attributes as they would be for diamonds. In opposite, these flaws are considered part of the character of rubies and the lack of inclusions is a sign of synthetic stones as the latter tend to be eye-clean.

The value of rubies depends on whether these inclusions are visible to the naked eye and if they affect the gem’s transparency and brilliance. It is recommended to avoid larger inclusions that affect the transparency of the gem. Inclusions and cracks that reach the surface will affect the durability of the stone and detract from its beauty. Such stones are not desirable as well.

Natural rubies typically contain thin mineral and crystal inclusions called needles. When the inclusion is rutile and needles are present in intersecting groups, the effect is called silk. The rutile silk causes light to scatter across the facets of the gem, making it appear lighter. This adds softness and spreads the colour more evenly, contributing positively to the gemstone’s appearance. Needles can also cause the star effect (asterism) when the stone is cut in cabochon.

A ruby’s crystal shape affects its cut and proportions, which is why the most common shapes available on the market are oval and cushion with brilliant cut crowns and step cut pavilions. Other cuts such as round, pear, marquise, trillion and emerald are also available; however, these shapes are rare in larger sizes.

Ruby is not an easy gemstone to work with due to its pleochroic nature. In one crystal direction, ruby appears red to purplish-red, while in another, it appears orangy red. That is why it is not always possible to orient the rough for the ideal colour return. Ruby is a very expensive precious gemstone, so cutters are careful not to waste material during the cutting process.

Ruby is an extremely durable precious gemstone, 9 on the Mohs hardness scale, meaning it is hard enough to survive accidental hits. However, you may want to take special care to prevent such abuse, so it is always recommended to remove your ruby jewellery before household cleaning, playing sports, exercising or gardening.

Remember to put your ruby jewellery on last when dressing. Residue from makeup, hairspray, perfume and body creams can damage the setting or make the centre stone look dull. Putting your jewellery on should always be the last step.

To clean rubies at home, add some mild dishwashing soap to warm water. Stir the water and dish soap together using a spoon or your finger. Carefully place your gemstone in the liquid you have prepared and soak it for about 20 – 30 minutes. After soaking, use a soft toothbrush to remove the dirt. Brush your jewellery gently not to loosen the prongs, paying particular attention to all sides and edges. Make sure you clean the lower part of the gem as well. The base of the mounting underneath the stone is where a lot of dirt builds up. Next, rinse out your piece of jewellery with clean water and dry it with a soft and lint-free cloth.

When storing ruby jewellery, keep it separated from other softer gemstones to protect them from being scratched. Similarly, you will want to protect your rubies from harder diamonds, meaning it is a good idea to store your gems in individual cloth jewellery bags.