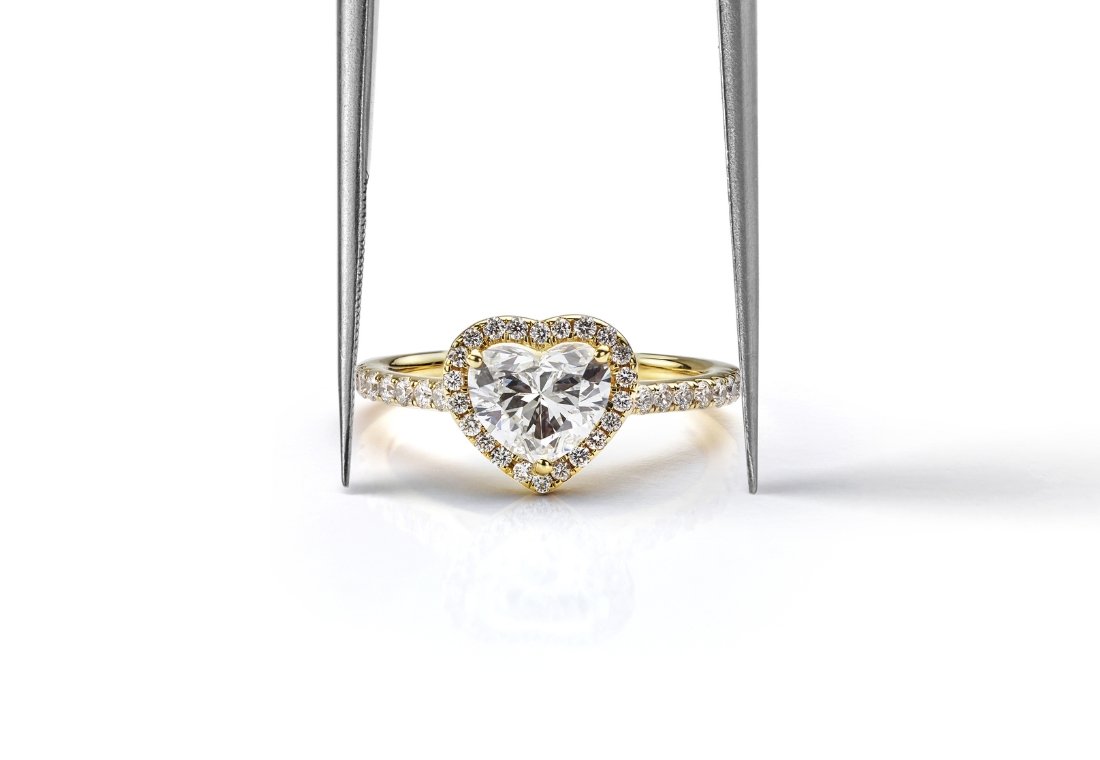 When it comes to designing the perfect ring, there are many features to consider. That is why it is necessary to know ring anatomy to explain to your jeweller what you exactly want. This guide will help you understand each part and make it easier to communicate with your designer.

The term “setting” has two different meanings. The first refers to the entire ring, excluding the centre stone. Jewellers often mention the price for the setting only, meaning the total of the finished ring depends on the type of gemstones you choose and their characteristics.

The other meaning of the term “setting” refers to the head of the ring, the part of the ring anatomy that holds the centre stone. The head is located at the top of the ring. It determines how the stones interact with light and at which angle the centre stone can be seen.

It is worth mentioning that the terms “solitaire setting”, “halo setting”, “cathedral setting”, and others describe the head of the ring, i.e. the way the stones are mounted, rather than the way gems are held.

Depending on the way the stone is held, ring heads are divided into prong, bezel and channel heads which feature different variations and designs.

A prong is a tiny metal tip that holds the gemstone in place. Most rings feature three, four, six or eight prongs depending on the gemstone shape. In turn, the prongs can be rounded, pointed, flat or V-shaped. The main advantage of the prong head is that it allows the light to play with the stone, making it appear larger and more brilliant.

The bezel is a setting that fully encircles a stone in a metal frame. This is probably the most secure way to set a stone. The half-bezel wraps only half of the gem and might be a good solution for those concerned about the visibility of the stone.

Channel heads feature the stone in between two straight pieces of metal on either side of it. In a channel setting, gemstones are set closely together into grooves of the channel, which tightly hold the stones, protecting them from outside forces.

It is important to mention that not all rings have a head portion. Some designs feature gemstones that are directly set into the rest of the ring without using a separate part.

The “gallery” is a term that refers to the underside of the head beneath the centre stone. It is a part of the setting that adds to the profile beauty of the ring.

Depending on the design of the ring, galleries can be highly minimalistic or feature gemstones and milgrain details. A ring gallery is a prime location to see wear caused by other rings, such as wedding, anniversary and eternity bands. The constant friction can wear, crack and break the gallery. This is why you should be careful with your ring if you choose a gallery design.

The airline in the ring design is the open section under the head. It is most commonly found in rings featuring solitaire, trellis, cathedral and three-stone settings, and it gets visible when the jewellery is viewed from the side.

The term “solder points” is used to describe the positions at which separate pieces of complex designs are soldered together. For example, the head and the rest of the ring are made separately and then joined. The points at which the parts join are called solder points.

Shank is the metal portion of the ring that encircles the finger. This is the technical term for the widely used ring band. There are many types of ring shanks, from plain round to flat-bottomed styles, which tend to keep the ring from spinning.

If the ring has a distinct design featuring pavé diamonds on the band, the ring shank is said to start at the point where the design stops. Shank is also the portion where jewellers add or remove metal to resize the ring.

In many rings that have accent diamonds on the shank, jewellers intentionally do not put diamonds all the way around to allow for the resizing work to be done. The small plain metal gap that has no diamonds on it is called a sizing bar.

The shank can wear thin over time. In this case, jewellers “re-shank” the ring, meaning they replace the worn-out metal. However, if you are careful with your ring, the shank will last your lifetime.

The term “shoulders” refers to the part of the shank that is very close to the head of the ring. In other words, this portion holds the head. Ring shoulders are often set with accent diamonds to enhance the centre stone or talked about to describe the thickness of the band.