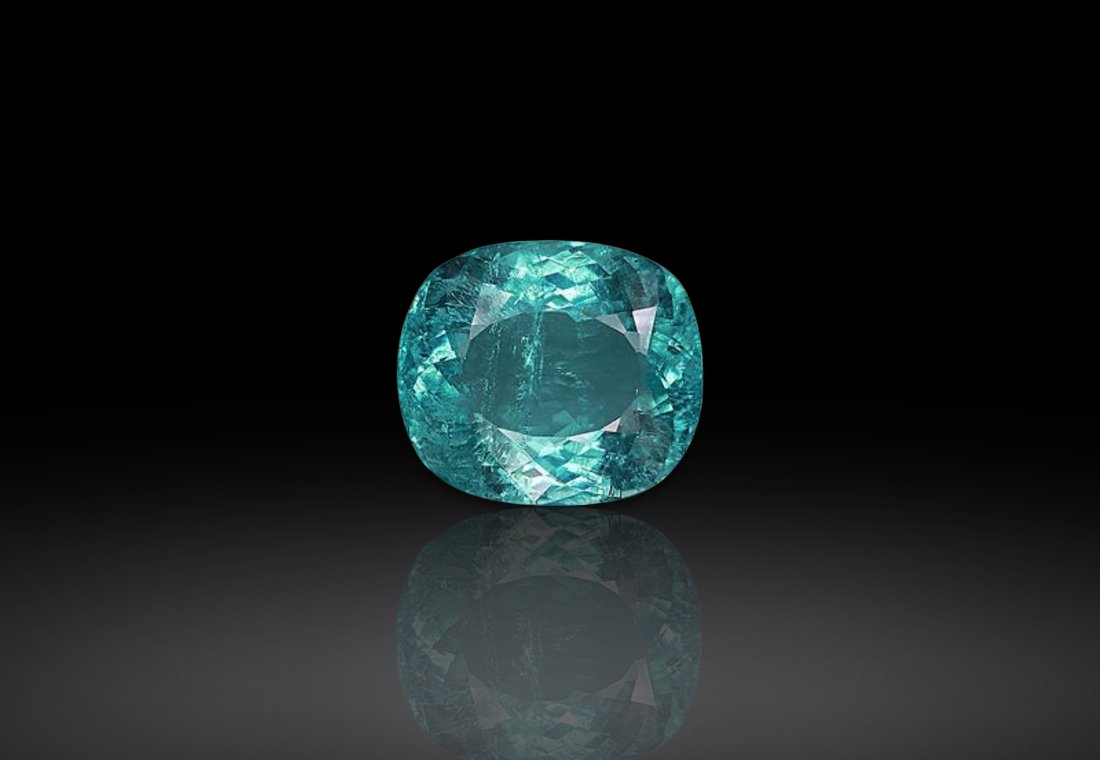 Paraiba tourmaline, named after the region in Brazil where it was discovered in the late 1980s, is one of the rarest and most sought-after gemstones in history. Appearing to glow from within, the paraiba tourmaline is renowned for its intense blue colours and beautiful greenish-blue shades.

Paraiba tourmaline is an extremely rare brightly coloured copper-bearing/cuprian elbaite (tourmaline) that shows intense blues and greens. It was discovered by an avid gem prospector named Heitor Dimas Barbosa in the late 1980s in the Batalha mine, in the state of Paraíba, Brazil, hence the name.

Like many other elbaites, paraiba tourmaline was formed in pegmatite. According to researchers, its crystals formed under very unusual conditions with large amounts of trace elements of copper and manganese, which caused vivid blue colour. This phenomenon is unique because copper is not a colouring agent in any other tourmaline variety, and normally colouring in tourmalines is caused by iron, manganese, chrome and vanadium.

Barbosa discovered a gem with an unusual blue-green colour, never seen in any other gemstone before. The rough stone glowed with alluring neon, an effect shown due to the presence of copper and manganese in the gem’s crystal structure.

A year later, the unique gem was introduced to the gemstone world at the annual Tuscan show in 1990. According to records, top-quality paraiba tourmaline specimens sold for as much as $3,000 per carat. At the time, this price was considered too high for a tourmaline; however, it seems surprisingly affordable today.

After a sensational introduction, the demand for paraiba tourmaline was so strong that it was almost impossible for gem dealers and jewellers to buy stock. However, in 2001 similar tourmalines were discovered in Nigeria, but their colour was not as saturated as the colour of Brazilian paraiba tourmaline. Later in 2005, a third discovery was made, this time in Mozambique. Mozambican copper-bearing tourmalines were found in a range of colours from green to blue-green and violet. This material was also less included than the Brazilian and was found in larger sizes.

The new finds of intense blue-green tourmalines led to active debates about whether the term “paraiba” could be applied to the newly discovered material in Africa. Although both Brazilian and African tourmalines were almost chemically identical, the gemstone community argued that “paraiba” should be reserved for the Brazilian gemstones only. That is why some sellers started to use the term “African paraiba” in reference to tourmalines mined in Nigeria and Mozambique. However, in 2012, the Laboratory Manual Harmonization Committee (LMHC) agreed that the term “paraiba” should refer to the specific type of tourmaline of whatever geographic origin.

It is the interplay between copper and manganese that give paraiba tourmalines a variety of beautiful colours. Depending on the concentration and proportions of these two elements present in the material, the tourmaline gets various shades and saturations.

Currently, the most valuable paraiba tourmalines feature neon blue colours with strong saturation and medium tone. Many neon blue gems have a secondary green hue. While slight green secondary hues do not impact the price of the gemstone, stronger hues do. In other words, pure blue stones are usually more valuable than blue-green and green paraibas. Paraiba tourmalines with less popular hues, such as pink and violet, are more affordable due to their lower demand. It is worth mentioning that paraibas may receive heat treatment to lighten darker stones and to change less popular colours into blues.

Paraiba tourmalines from Brazil are more expensive than those from Mozambique and Nigeria. It is because Brazilian gemstones are more vividly saturated.

The clarity in paraiba tourmalines is tolerated more than colour. Eye-visible incisions are not considered negative features, although they make a slight value difference. Clarity enhancements such as laser drilling and fracture filling are not desirable because untreated gems of lower clarity are more valuable than ones with improved clarity.

Paraiba tourmaline is the most valuable tourmaline variety due to its attractive colour, saturation and rarity. That is the reason paraiba tourmalines are almost always custom cut. Crystals are usually faceted into brilliant cuts, often oval, pear, and cushion shapes, avoiding windowing which reduces value considerably.

Since copper in high concentrations is responsible for blue and green hues, experienced cutters aim to eliminate manganese, the red colour component, using the burning technique during the tourmaline’s cutting process. It allows getting sought-after blue coloured gems. However, the vivid blue colour does not reveal itself until the stone is fully cut and polished.

You will rarely see Brazilian paraiba tourmaline bigger than one carat, as tourmaline crystals discovered in Paraíba were almost all fragments. Nigerian and Mozambican stones come in larger sizes. However, with paraiba the main factor is its colour and not size. So if you have to choose between a larger gem and a more saturated one, the stone with the more vivid colour is always a better choice.

Where to Buy Paraiba Tourmaline

Now when you know what makes the paraiba tourmaline a unique, highly sought-after gemstone, it is time to find a reliable source to buy from. In our opinion, Star Lanka is one of the best places offering a wide range of paraiba tourmalines at reasonable prices.

Founded in 1985, Star Lanka is a steadily and consistently growing company specializing in a variety of high-quality natural gemstones from rubies to paraiba tourmalines. Here you can find a beautiful array of paraiba colours from romantic sky blue to vivid blue and neon blue gemstones.

Each product listed on the Star Lanka website is presented with detailed information on colour, clarity, dimensions, certificate, the origin of the stone, and information on whether the gem has undergone any treatments. Star Lanka offers free worldwide express shipping on all orders, meaning buying a beautiful paraiba tourmaline is made super comfortable and easy.