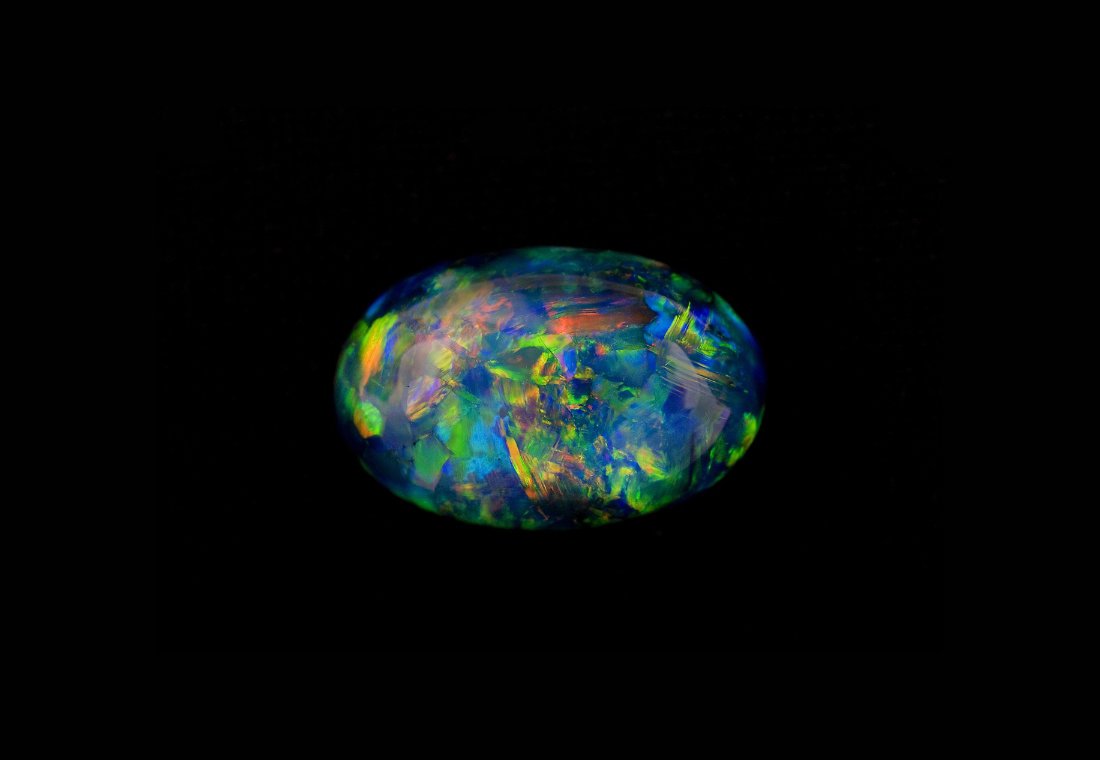 Opals are unique gemstones that display dazzling play of colour mixed with brightness, shimmer and sparkle, which is why these semi-precious gems have adorned men since the dawn of history. Opal, the birthstone of October, is regarded as one of the most beautiful stones and must-have gemstones for many jewellery lovers.

The name “opal” comes from the Greek word “opallios” and the Roman word “opalus”, both of which originate from the Sanskrit word “upala”, meaning “precious stone”.

There is still an argument over how opal was formed. Most scientists follow the belief that opals are formed by water seeping into cracks in various rock formations. When the water evaporates, it leaves a silica gel-like substance, which hardens for millions of years and turns into opals.

A remarkable discovery made by the famous anthropologist Louis Leakey in 1939 showed that opal artefacts found in the cave of Kenya dated back to 4000 BC, more than 6000 years ago. The discovery proved that opals had been valued since ancient times, and people were crafting jewellery from opals thousands of years before the pyramids of Egypt were built.

Judging by the discovery, Ethiopia was probably the earliest source of opals. However, the main source of opals for the ancient world remained Eastern Europe and Turkey. Opals were exceptionally rare gemstones until 1800 when they were discovered in Mexico and Australia. Opal mines can also be found in Brazil, Honduras and the United States; however, Australia remains the main source of the finest opals, making up around 95% of all gems mined.

Describing the colour of opals is not an easy task since they display all the colours of the rainbow in one abstract painting.

To make things easier, let’s start with the basics. There are two types of opals, precious and common; precious opals display “play-of-colour”, while commons do not.

Opals get colour due to their background colour, which is created by impurities within the structure of the gemstone and the “play-of-colour” produced by the silica structure of the gem. Opals are “filled” with millions of tiny spheres of hard silica sitting on top of each other. When light hits these spheres and bounces off at different angles and directions, magic happens, and opals show their unique dazzling colour.


Along with various colours, opals have many patterns. While you can never find two opals with the same pattern, they are categorized according to some distinguishing arrangements of colours and shapes.

The most valued and sought-after pattern is called Harlequin, which shows large sections of colour that are nearly the same size and shape as a mosaic.

Other remarkable patterns include:

Black or Dark Opals are the rarest and most expensive. The term black refers to the background colour, which can be completely black or just of a dark tone. These opals are mostly found in Ethiopia and Australia.

White or Light Opals are the most common variety. Although they have a white, milky or transparent background, this variety still displays a stunning play of colour.

Fire Opals are stones that have a yellow, orange or red colour. These gems have bright colours but usually do not display the eye-catching play-of-colour seen in other varieties. If they do, it is generally deep within the stone. Such rare gems are called Precious Fire Opals.

Boulder Opals come in a wide range of colours. Such opals are still attached to the rock on which they were formed. The background rock gives a unique beauty to the stone, with dark ones being the most popular.

Matrix Opals are intriguing. This variety displays flecks of opals ingrained into pores or holes found in rocks.

Other varieties include Koroit Opals, Yowah Nuts, Dendritic Opals, Opalized Wood Opals and Hyalite Opals. In general, there are over 20 widely known varieties of opals, which get their names after their country of origin or their colour, size, patterns and natural designs.

As we know, clarity is the degree of transparency or lack of blemishes in a gemstone and the higher the clarity grade, the more expensive the stone. However, opals are unique stones and differ from these rules. They are graded as transparent, translucent or opaque.

With black opals, clarity is not an issue, as they should have an opaque background on which they show off the colours. However, with crystal opals, we need as high clarity as possible to see the play of colour. Cloudy or milky opals are certainly less valued.

With Boulder and Matrix Opals, clarity is not an issue too, as opal material itself is included in another rock.

Opal is a relatively soft gemstone, 5.5 to 6 on the Mohs hardness scale. At the same time, it is durable enough to survive accidental hits; however, you should take special care to prevent damage.

Remember to remove your opal jewellery before physical activities or household cleaning, as this gem can be easily damaged by other harder materials and surfaces. When storing opals, keep them separated from other harder gems and jewellery that may scratch, chip or even break them.

Opals can come as cut and polished solid stones and doublets or triplets. Taking care of these types is a little different.

Solid stones cannot be damaged by water, but they can be harmed by very dry conditions or rapid temperature changes. That is why it is recommended to store solid stones in a plastic bag with a damp cloth. You should also avoid leaving opals exposed in sunlight or a dehumidified room for a long period.

On the contrary, doublets and triplets are sensitive to water as they involve glue and backing material. This means you should not soak such stones for a long time as water can lift the backing and fog up the top layer.

Do not use steam or ultrasonic cleaners to clean opals as they do not tolerate rapid temperature changes. Such conditions may cause fractures. Clean your opals using a soft cloth and mild dishwashing soap if needed.