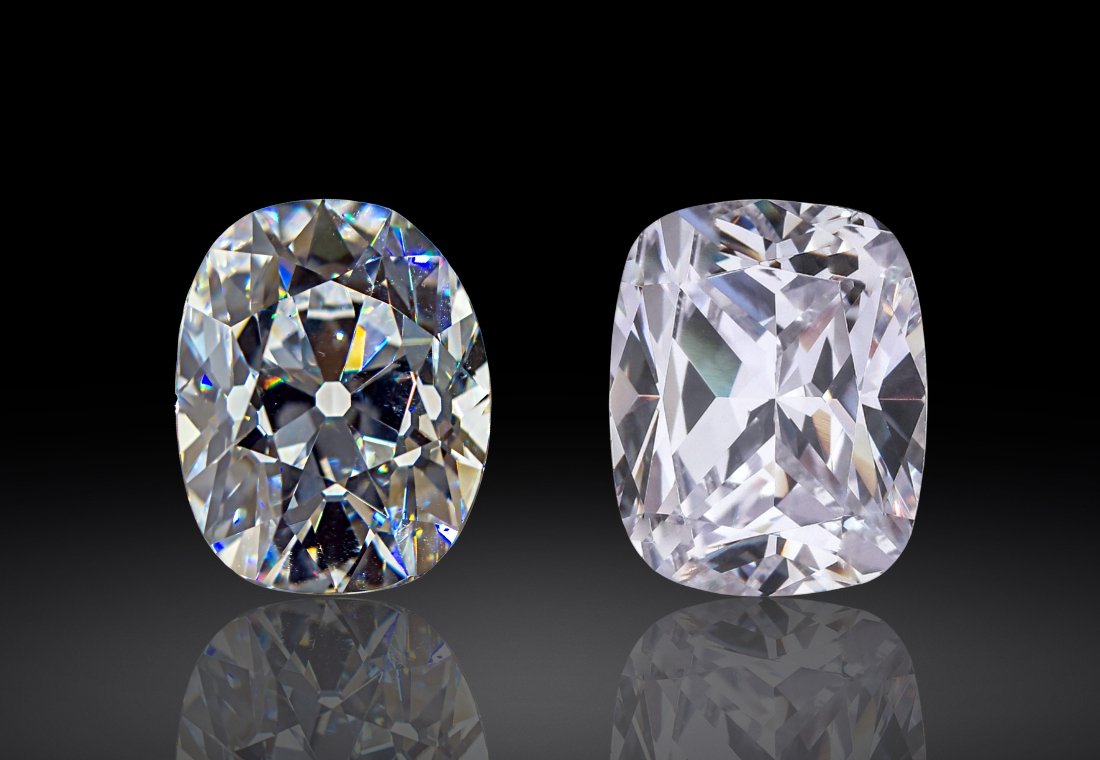 Diamond buyers often compare old mine and cushion cut diamonds due to their similar shapes. Although these two share some features, several characteristics set them apart. Old mine cut vs cushion cut diamonds – let’s discover the differences and see what aspects to consider when choosing between the two.

What Is an Old Mine Cut Diamond?

The history of the old mine cut traces back to the mid-17th century when diamonds were cut by hand, and cutters of the time used only their eyes to measure the precision of their work.

The old mine cut (OMC), also known as miners cut, mine cut, old miner cut and old miners cut, is an antique cutting style featuring 58 brilliant facets designed to accommodate the lighting environments of the time. Old mine diamonds were not highly symmetrical; however, they were cut to sparkle in low and warm lighting derived from candlelights. It is generally considered that the old mine cut had a square shape with rounded corners; however, old mine diamonds came in various forms, such as pear, marquise and triangular, except for round.

It is worth mentioning that the term “old mine” came into common use around the late 19th century and referred to a specific lapidary work using limited tools and techniques. The old mine was the de facto cutting style of the time, and most gemstones were cut into old mines until the early 20th century.

What Is a Cushion Cut Diamond?

The cushion cut, also referred to as the pillow cut, is a descendant of the old mine cut and features a soft square or rectangular shape with curved corners resembling a cushion, hence the name.

The history of antique cushion traces back to the 19th century. Over time, it was modified into a brilliant cushion cut thanks to the evolution of the diamond cutting techniques and cleaving process to maximize the stone’s light performance.

Usually featuring 58 facets, the modern cushion cut combines the classic old mine cut and the round brilliant facet pattern. It has several variations, which differ in the number of facets, arrangement, and shape. Due to these variations, some cushion cut diamonds exhibit more brilliance than others.

The shape of the old mine and cushion cuts is the feature that creates confusion among diamond buyers. Both cuts have slightly rounded, curved sides with a pillow-like appearance. Both come in square and rectangular shapes; however, the old mine cut may also come in various forms, such as pear, marquise and triangular, which we never see in cushion cut diamonds.

Although both cushion and old mine belong to the brilliant cut group, the key difference between the two is the way they are cut.

The old mine cut diamonds were cut by hand and designed to accommodate the lighting environments of the mid-17th century. They were cut to sparkle in low and warm lighting conditions delivered from candles. No wonder old mine diamonds were also not highly symmetrical. OMC diamonds feature chunky facets, a small table, an open culet, a very high crown and a deep pavilion.

In comparison, the modern cushion cut was designed to sparkle under electric light, not to mention that the antique cushion cut was modified over time with the evolution of the diamond cutting techniques to maximize its light performance. The changes include culet shrinking and table widening to increase the ability to reflect light and high symmetry. Also, the cushion cut has a lower crown, shallower pavilion and elongated facets compared to the old mine cut.

Both the old mine and cushion are brilliant cuts; however, the way they react to light is a bit different. The old mine cut was primarily designed to accommodate the lighting environments of the time, while the modern cushion cut was fashioned to maximize its light performance.

The difference in facet shapes and sizes makes the old mine cut show larger face-up patterns of light and dark compared to the cushion cut, which exhibits more brilliance due to its elongated facets.