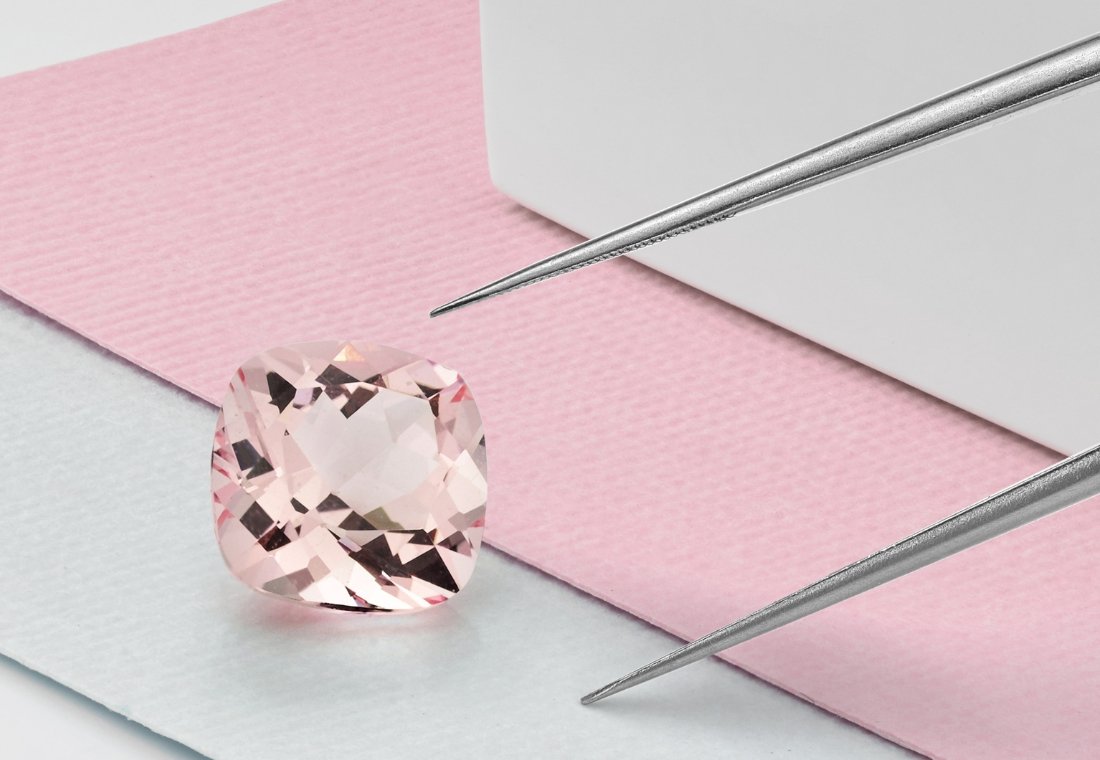 Morganite is a semi-precious gemstone that embodies the first pale rays of sunrise that warm the heart and soul. Known as “the pink stone of love”, morganite has always been prized by gem collectors due to its rarity and sophisticated colours.

Morganite, also known as pink beryl, is the light pink to the violet-pink variety of the beryl mineral group. Since beryl is most famous for being the mineral group of emeralds, morganite is sometimes referred to as “pink emerald”.

Beryl was formed deep in the Earth’s crust under heat and pressure for hundreds of millions of years. Pure beryl is colourless; however, if it interacts with manganese or caesium, colourless gemstone turns into enchanting pink and gives us morganite.

Pink beryl was first discovered in Madagascar in 1910. Shortly, a famous American gemologist George F. Kunz renamed it “morganite”, in honour of John Pierpont (J.P) Morgan, an American banker and gem enthusiast, for his financial support for the arts and sciences, and his gifts of gems to the American Museum of Natural History in New York and the Museum of Natural History in Paris. Since then, morganite has been prized by gem collectors all around the world.

Morganite can be found in many locations worldwide; the most two significant deposits are in Brazil and Madagascar. Other important sources include China, Russia, Afghanistan, Mozambique, Zimbabwe, Namibia and the United States.

Morganite colour ranges from pale pink to pink, peachy pink to peach, and salmon to violet-pink. Its beautiful colour is owed to traces of manganese and caesium. Most morganites come in very pale or pastel colours, while vivid or intense specimens are very rare. However, larger gemstones typically show stronger colours.

The most desirable colour in today’s market is pure pink; however, peachy and salmon-coloured gems have been in very high demand recently. Another highly sought-after colour by collectors is magenta morganite from Madagascar.

It is worth mentioning that morganites are almost always heat-treated to improve the pink colour and remove yellow and orange tints. The treatment is not detectable, and the resulting colour is always stable, meaning it will not fade with time.

Since morganite is a pleochroic gemstone, cutters need extra care to orient the rough for fashioning. Strong hues in morganites are rare, meaning to achieve the finest colour, gems usually have to be fairly large.

Morganites are cut in all standard shapes similar to other coloured gemstones, ovals and cushions being the most common.

Morganite is a hard and durable gemstone, 7.5 – 8 on the Mohs hardness scale. While it is an excellent jewellery gemstone for daily wear, it requires some care to prevent damage.

Morganites are sensitive to pressure and vulnerable to household chemicals, which is why you should avoid wearing morganite jewellery when using chemicals like bleach and sulfuric acid. Remember to remove your morganite jewellery before exercising, cleaning or other physical activity since this gem can be easily scratched by other harder materials. You should put your morganite jewellery on last when dressing. Chemicals from makeup, hairspray, perfume and body creams can change the colour of the gemstone or make it look dull. Putting your jewellery on should always be the last step.

To clean morganite at home, you add some mild dishwashing soap liquid to warm water. Stir the water and dish soap together using a spoon or your finger. Carefully place your gemstone in the liquid you have prepared and soak it for about 20 – 30 minutes. This will help to loosen any dirt. After soaking, use a soft toothbrush to remove the dirt. Brush your morganite jewellery gently so as not to loosen the prongs, paying particular attention to all sides and edges. Make sure you clean the lower part of the gem as well. The base of the mounting underneath the stone is where a lot of dirt builds up. Next, rinse out your piece of jewellery with clean water and dry it with a soft and lint-free cloth.

Do not use steam or ultrasonic cleaners if the stone has liquid inclusions or fractures.