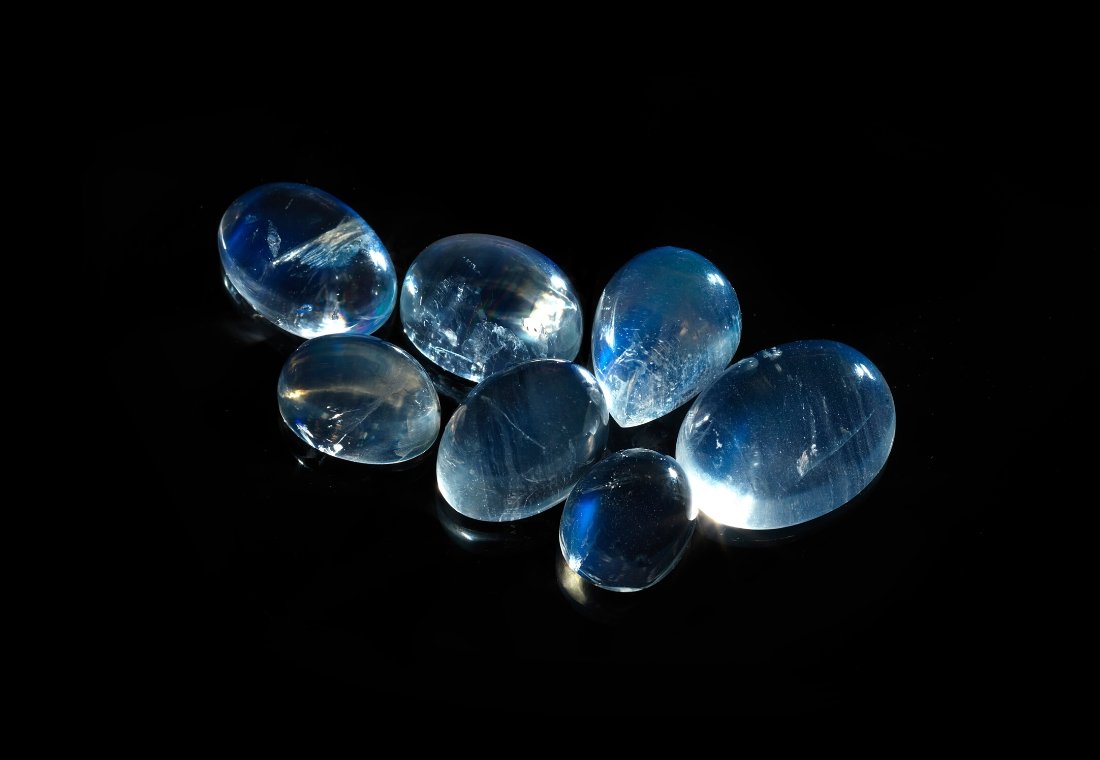 Moonstone, one of the three birthstones of June, is a unique gem that displays a rare glowing sheen known as adularescence, resembling the glow of the moon through a veil of thin clouds. Its unusual appearance has captivated the hearts of jewellery lovers for centuries and made it the most well-known gemstone of the feldspar group.

Moonstone is a variety of feldspar-group mineral orthoclase which displays a glowing colour sheen resembling the moonlight, hence the name.

Feldspar is the most widespread mineral, making up more than half of the Earth’s crust. It consists of silica and aluminum and forms as a result of magma or lava crystallization, being subjected to heat and pressure under the earth’s crust or crushed together in sedimentary rocks. To form a moonstone, volcanic activity should cause two particular minerals to mix together, orthoclase and albite. These two minerals solidify at different temperatures, and as long as they cool, they separate into tiny alternating layers. Once hardened into a gemstone, the layers produce the phenomenon called adularescence, an effect that makes the light appear to billow across a gemstone, giving its surface a glowing appearance.

It is worth mentioning that the layering occurs only with orthoclase and albite mineral combination, provided the rock cools over a very long time. Quick cooling or the wrong mineral combination creates similar gems but lacks the famous adularescence effect.

Moonstone has been regarded by mankind for thousands of years. It was associated with the goddesses of Ancient Greece, Selene and Artemis, and the Roman virgin goddess and protector of childbirth, Diana. The old Greek name for moonstone was Aphroselene, after the goddesses Aphrodite (love) and Selene (moon). In India, the moonstone was considered a holy gem, and it was called Chandrakanta in Sanskrit, meaning beloved of the moon.

The traditional source of moonstones was Sri Lanka. Later moonstone was discovered in Switzerland in the area around Mt.  Adular. That is why, at the time, moonstones from Switzerland were called adularia, giving rise to the term adularescence. Today moonstones can be found in Armenia, Australia, Brazil, parts of Europe, India, Madagascar, Mexico, Myanmar (Burma), Sri Lanka and the United States.

Moonstone comes in colourless to white, grey, green, yellow, and orange to brown colours. However, it is one of the rare gemstones whose value is determined by its glowing sheen called adularescence rather than body colour.

The body colour (background colour) of moonstone is caused by impurities, generally due to the iron content, mixed with the base when the crystals were being formed under heat and pressure. The adularescence effect comes in white, silver and blue colours and is best displayed against a colourless body colour. The thinner the alternating layers of orthoclase and albite, the rarer it is and the more shimmering colour we see.

The most valuable moonstone features colourless body colour combined with semitransparent to nearly transparent appearance and vivid blue adularescence known as blue sheen. The sheen should be centred on the top of the gem, and it should easily be seen from various viewing angles. The next, highly-regarded adularescence colour is silver which resembles the look of the real moon.

Moonstones can be described as transparent to translucent gemstones, with transparent specimens being more valuable.

Inclusions can interfere with the gem’s adularescence, so the fewer inclusions the better. A perfect moonstone would have no inclusions and clear transparency to display its enchanting electric glow. Interestingly enough, characteristic moonstone inclusions include tiny tension cracks called the centipedes as they resemble the many-legged creatures.

Some moonstones display chatoyancy, also known as the cat’s-eye effect, where inclusions within a gemstone reflect a thin band of light resembling the eye of a cat. Other specimens show four-rayed stars, an effect known as asterism.

Moonstones are mostly cut into cabochon as this cutting style is the best to display their shimmering glow and smooth satin finish. Cabochons tend to be quite high as this form gives the gemstone a better chance to display the adularescence effect. Since adularescence is usually stronger in one direction, cutters also need to carefully examine the rough to determine the direction to cut and polish the gem.

Moonstone is a relatively durable gemstone with a rating of 6 – 6.5 on the Mohs hardness scale. This means you may want to take special care to prevent accidental hits and remove your moonstone jewellery before household cleaning, playing sports, exercising or gardening.

To clean the moonstone at home, use mild dishwashing soap and warm water. Prepare a soapy solution, carefully place your gemstone in the liquid and soak it for about 10 – 15 minutes. After the soaking, use a soft toothbrush to remove the dirt. Next, rinse out your piece of jewellery with clean water and dry it with a soft and lint-free cloth. Ultrasonic and steam cleaners are not recommended.

Moonstone jewellery should be stored in an individual cloth bag or a fabric-lined box to protect it from harder gemstones such as diamonds and sapphire.