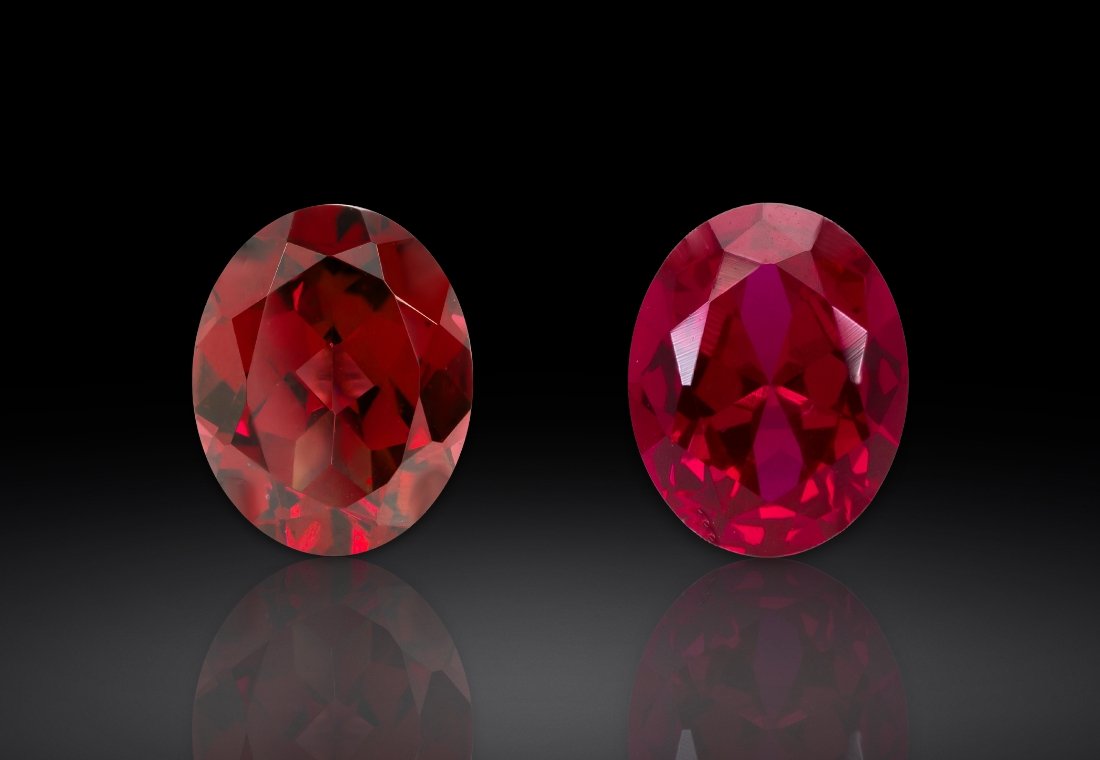 Garnet vs Ruby: What’s the Difference?

At first glance, garnet and ruby look very similar to an untrained eye. Although both have a vibrant red colour, one is a precious gemstone, while the other is a semi-precious gem. Garnet vs ruby – let’s discover the difference and learn not to confuse the two.

Before technological advancement, all red gemstones were considered rubies, including garnet. Both are red and sparkly, so no one wondered why the difference even mattered.

Today, the difference matters because ruby is one of the four precious gemstones, along with diamond, emerald and sapphire, and garnet is a somewhat abundant semi-precious gem. Both stones have some benefits to offer, but the actual value of rubies is significantly higher.

Garnet refers to a large group of silicate minerals, that share a similar crystal structure and physical properties but vary in chemical composition. With different varieties and chemical formulas, garnets can be formed in many ways. However, in general, garnet crystals form when sedimentary rocks get subjected to immense pressure and temperature. Such conditions melt the rock, and as it cools, it crystallizes in cracks and gaps in metamorphic rock surroundings. Once silicate material mixes with other chemical impurities, it creates various garnet colours.

Rubies are formed under immense pressure and intense heat. They consist of oxygen atoms called corundum and aluminium, which turn into liquid under heat and pressure and seep into cracks in igneous or metamorphic rocks. When the liquid cools, it usually turns into colourless crystals. However, when minuscule traces of chromium mix with corundum, they turn red and give us rubies.

Garnet vs Ruby Colour and Light

Both ruby and garnet have deep red colours. However, there are several distinctions in their colour, hue and intensity, which help us set garnet and ruby apart.

Ruby gets its red colour from the presence of chromium microelements, while garnet is coloured red by iron during its formation process. This difference cause rubies to have a more intense shade of red. In comparison, garnet appears slightly lighter and paler. In addition, ruby has a cooler red undertone and sometimes appears purplish or bluish, while garnet has a warmer hue and leans towards an orangy-yellowish shade.

It is also worth mentioning that ruby comes in red colour only, while garnet is usually red, however; it can be pink, purple, brown, yellow, orange, green, black and colour-change, which appears blue in daylight and red or purple under artificial light.

Garnet vs Ruby Clarity and Durability

Rubies typically display inclusions, which are not looked upon as negative attributes as they would be for diamonds, for example. In opposite, these flaws are considered part of the character of rubies. Garnets, on the other hand, are typically eye-clean. Blemishes and inclusions in garnets are not that tolerated.

Ruby is a very durable gemstone, with a rank of 9 out of 10 on the Mohs scale. Garnet is a considerably less durable gem, with a rank of 6.5 – 7.5 on the Mohs hardness scale, meaning it is a softer gemstone in comparison. Although you might not be able to determine the hardness of the stone by looking at it, the difference in durability is quite an important factor that can help a professional tell between the two.