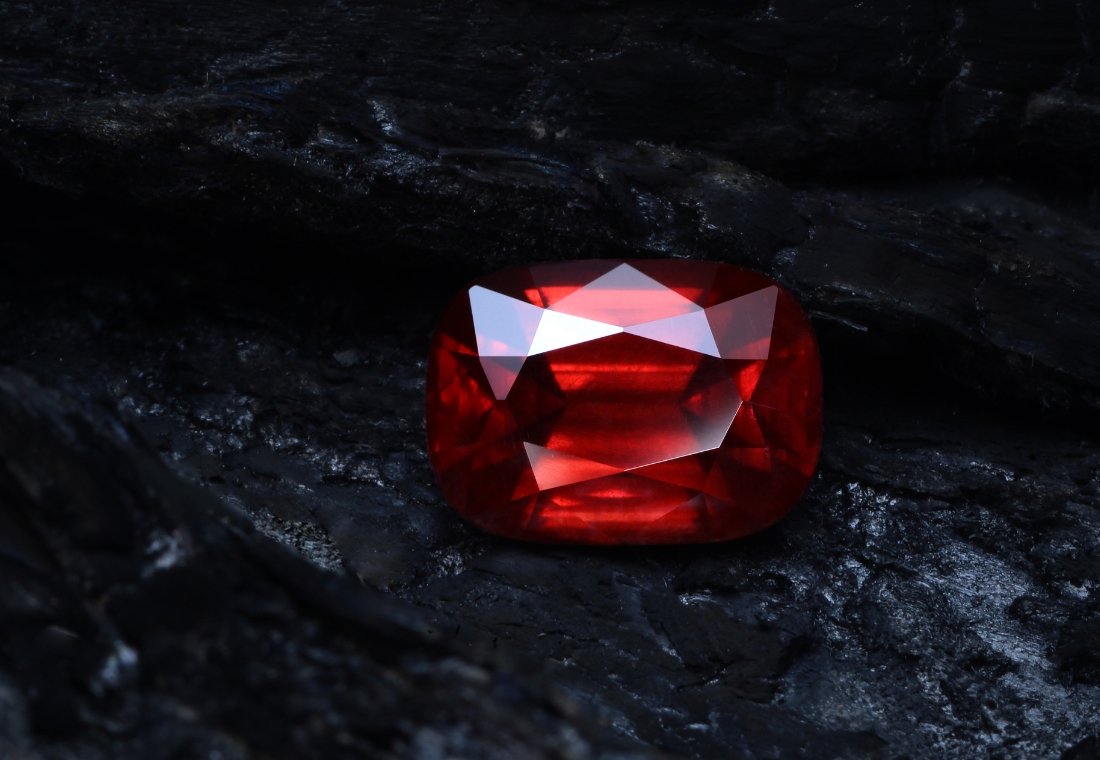 Garnet, the official birthstone for January, is generally thought of as red but can be found in a wide variety of colours. This beautiful semi-precious gem is one of the most ancient stones known to man, with a history tracing back more than 5000 years and discovered amongst Ancient Egypt artefacts.

The name garnet comes from the Latin “granatus”, from “granum”, meaning grain or seed, possibly a reference to the vivid red seed covers of the pomegranate, which are similar in shape, size and colour to some garnet crystals. It refers to a large group of silicate minerals that share a similar crystal structure and physical properties but vary in chemical composition.

With different varieties and chemical formulas, garnets can be formed in many ways. However, in general, garnet crystals form when sedimentary rocks are subjected to immense pressure and temperature. Such conditions melt the rock, and as it cools, it crystallizes in cracks and gaps in metamorphic rock surroundings. Once silicate material mixes with other chemical impurities, it creates various garnet colours.

The mineral garnet is found all over the world. It is quite common in its base form and is usually used industrially, for example, as an abrasive material for sandpaper.

Gem-quality garnet is not that easily mined. Different species and types are found in various locations around the world, such as Russia, Namibia, Kenya, Madagascar, Tanzania and Sri Lanka. However, the most significant sources as a whole are the US, Australia, India and China.

There are many varieties of garnets, but not all of them are used for jewellery production. Gem-quality garnets are broken into six main types:

There are also star garnets that have brownish-red or reddish-black colouring and display 4-rayed or even 6-rayed stars. This phenomenon is caused by rutile needle inclusions that align in a specific way to reflect light in a star-shaped pattern.

In general, colour variations in gemstones are caused by impurities within the host crystals. With garnets, it is the same story; however, in some cases, it is hard to tell which mineral causes which colour. It is also worth mentioning that some gemstones, including some types of garnets, get their colour from their basic chemical formula and not from an added impurity.

Red and brown garnets are coloured by the presence of iron during their formation process. Orange and pink garnets get their colour from manganese, yellow from calcium and green from aluminium, chromium or vanadium.

Depending on the combination of mineral impurities, garnets get unique colours and shades. For example, an iron and chromium mix produces a purple garnet.

As in the case of all gemstones, rare-coloured garnets are the most expensive. Some of the rarest colour garnets are the rich orange-red spessartine, also known as mandarin garnet, and the trio of rich greens, tsavorite, demantoid and uvarovite. However, the most highly valued type is the colour-change Garnet from Madagascar and Tanzania, which appears blue in daylight and red or purple under artificial light. Plain blue garnets do not exist.

As a general rule, garnets with fewer incisions are more valuable. A typical garnet should be eye-clean; blemishes and inclusions are not that tolerated.

However, the story changes a little when it comes to unique inclusions, as they can increase the value of a stone. For example, Russian demantoid garnets can have “horsetail” inclusions, fine golden hair-like flaws within the gem. Such rare inclusions are regarded by gem collectors, as they serve as a reliable indication of their Russian origin.

Another example is the rare and expensive uvarovite garnet. It is an opaque stone, meaning clarity does not come into it. The third premium-priced garnet variety is tsavorite. While clean tsavorites are more valuable, it is expected that a large gem may have some flaws.

Garnet is a relatively durable gemstone, 6.5 – 7.5 on the Mohs hardness scale. It is hard enough to survive accidental hits; however, you should take special care to prevent damage.

Remember to remove your garnet jewellery before physical activities or household cleaning since this gem can be damaged by other harder materials and surfaces.

To clean garnets at home, use mild dishwashing soap liquid and warm water. Stir the water and dish soap together using a spoon or your finger. Carefully place your gemstones in the liquid you have prepared and soak them for about 20 – 30 minutes. This will help to loosen any dirt. After the soaking, use a soft toothbrush to remove the dirt. Next, rinse out your piece of jewellery with clean water and dry it with a soft and lint-free cloth.

Ultrasonic cleaners may be used with garnets; however, they are not generally recommended, as vibrations can loosen jewellery settings.

When storing garnet jewellery, keep it separated from other gemstones and jewellery as they may get scratched by other harder gems.