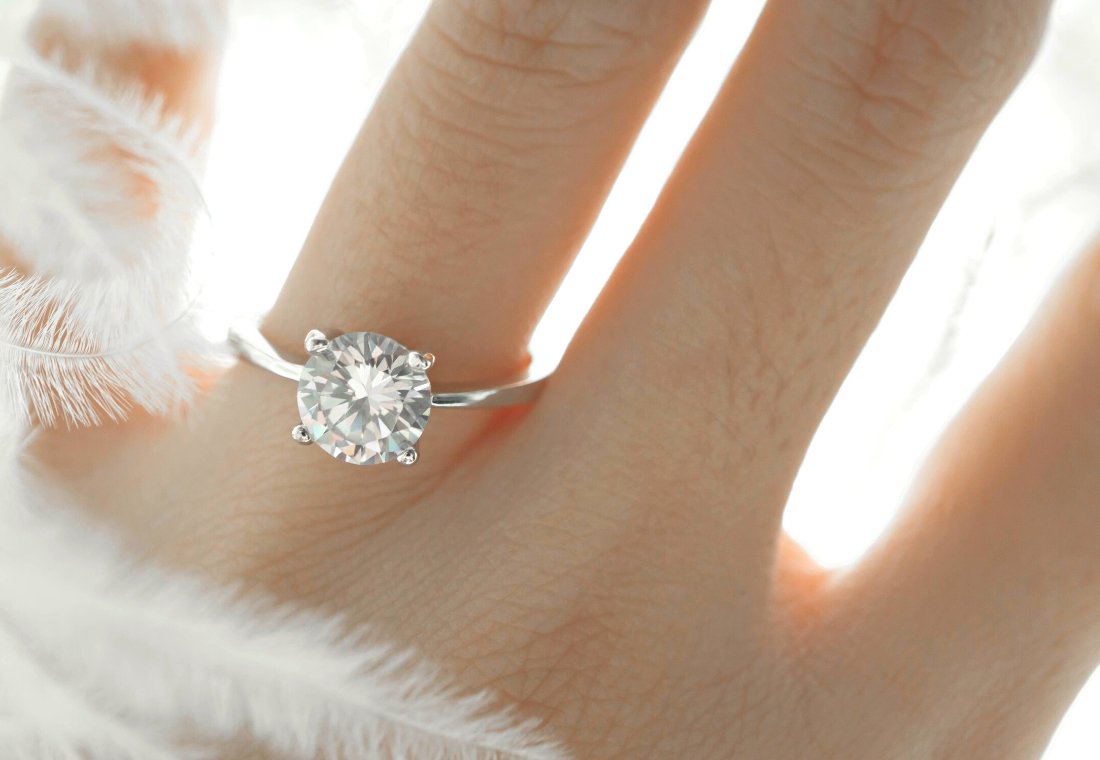 Four-prong rings vs six-prong rings – this is a common dilemma many buyers face during shopping for a new piece of jewellery. Let’s go over the details and see if there are any differences between those two setting types, and if one is better, why both options are offered by jewellers.

What Is a Prong in Jewellery?

A prong is a little claw that holds a diamond or another gemstone tightly in place. Prongs can be rounded, pointed, flat or V-shaped; the latter is more common for diamond shapes with sharp edges such as the marquise, princess and pear cut.

The prong setting or prong mounting is the most common and classic setting type used in rings and jewellery in general. Most prong settings feature either four or six prongs, both of which have advantages and disadvantages.

The main benefit of this setting type is that there is a minimum metal used, meaning there is more gemstone to see, and more light strikes a gem from different angles exposing its sparkle and brilliance. Another advantage is its versatility. The prong setting compliments and supports a variety of diamond shapes and sizes, offering a classic and timeless look.

One of the most crucial differences between four and six-prong settings is their effect on the gemstone.

Four-prong mountings make diamonds look larger, while six-prong settings make the stones look a bit smaller in comparison since more of the gemstone surface is covered with metal. For this reason, the four-prong setting is recommended when the size of your diamond is less than 1 carat not to overpower the gem with additional metal prongs.

It is also worth mentioning that a four-prong setting makes round diamonds look a bit square due to the configuration of the prongs. However, this boxy-looking effect is mainly noticeable with round stones, making a four-prong setting a good choice for square or rectangular-shaped gems. In contrast, if you have a round diamond set in a six-prong ring, it will not change the shape of the gem since the form of the prongs creates an illusion of a circle.

In general, the fewer prongs your ring has, the easier it is to clean. That is why, when it comes to maintenance, the four-prong ring setting is the winner. In comparison, the six-prong setting makes the cleaning of stones a bit harder, especially in the lower part where dirt tends to accumulate more. Although six-prong rings are harder to clean, they still have the big advantage of being more secure.

We all know that prongs wear down with time, and when they are worn, they can bend or even break, putting you at risk of losing your gemstone. If you have a six-prong ring and one of the prongs breaks, you still have five intact prongs that hold your stone securely due to their alignment. Moreover, a six-prong setting better protects your stone’s girdle from accidental hits. The situation is a bit risky with four prongs. If one of the prongs breaks, your gemstone is at a higher risk of coming loose and falling out. Since stones with four prongs have less of their surface covered by metal, they are also more exposed to damage during wear.

As a general rule, you should have your prongs inspected by a professional at least twice a year. Jewellers usually remove what is left of prongs and solder new ones in place. When replacing is not needed, they add more metal to prong tips to make them stronger. This process is called prong retipping. It is clear that when a jeweller repairs your ring, you will be charged a fee for each fixed prong. The more prongs you have that need to be repaired, the more you will pay.

Here is the main question, and it all depends on what is more important to you: safety or appearance.

In case the appearance is in the first place, opt for a four-prong ring. This is especially true for non-round and smaller stones (less than 1 carat), as the four-prong setting will make them look a bit bigger due to a higher level of brilliance and less metal coverage.

A six-prong setting is a better choice for those concerned about security; however, you should keep in mind that it also makes your stone appear a bit smaller. This type of setting looks perfect with round stones as the construction of prongs that are evenly distributed around the gem creates a full round effect, while a four-prong setting gives an angular effect making round stones look more square.

In case you care about protection but still want a four-prong setting, get it made of platinum. This metal is very durable and wears much more slowly than gold.

So what is the optimal number of prongs? There is no definite answer to this question. Just keep in mind all the advantages and disadvantages when buying a ring and take proper care of your prongs to avoid any problems in future.