Precious opals are commonly known for their ability to reflect unique dazzling colours against white and dark backgrounds. However, there is a variety of opals that shows colour against bright yellow, orange or red background. Such sought-after gemstones are known as fire opals.

Fire opal is a rare variety of precious opals that show colour against bright yellow, bright orange or bright red background, hence the name. Although these gems feature bright background colours, they usually do not display eye-catching play-of-colour seen in other opal varieties. If they do, it is generally deep within the stone, and such rare specimens are often referred to as precious fire opals.

Fire opals are said to form in the depth of ancient volcanoes. According to scientists, they were formed when water seeped into the silica-enriched lava and filled hollow areas under the immense heat and temperature of the volcano.

Fire opals were virtually unknown to the rest of the world until the Spanish reached what is now known as Mexico. That is the reason why fire opals are mainly associated with Mexico and are often called Mexican opals. The Aztecs were among the first to discover this unique variety of opals and called it the hummingbird stone or vitzitziltecpal. According to historians, Mexican opals were used by Aztecs for ceremonial and ornamental pieces between 1300 and 1521. Nowadays, Mexican fire opal deposits produce a significant amount of bright orange and orange-red material.

Another important source of fire opals is Ethiopia which mines opals since the 1990s. Gemstones discovered there are both fire opals and precious fire opals with a mainly yellow background colour. 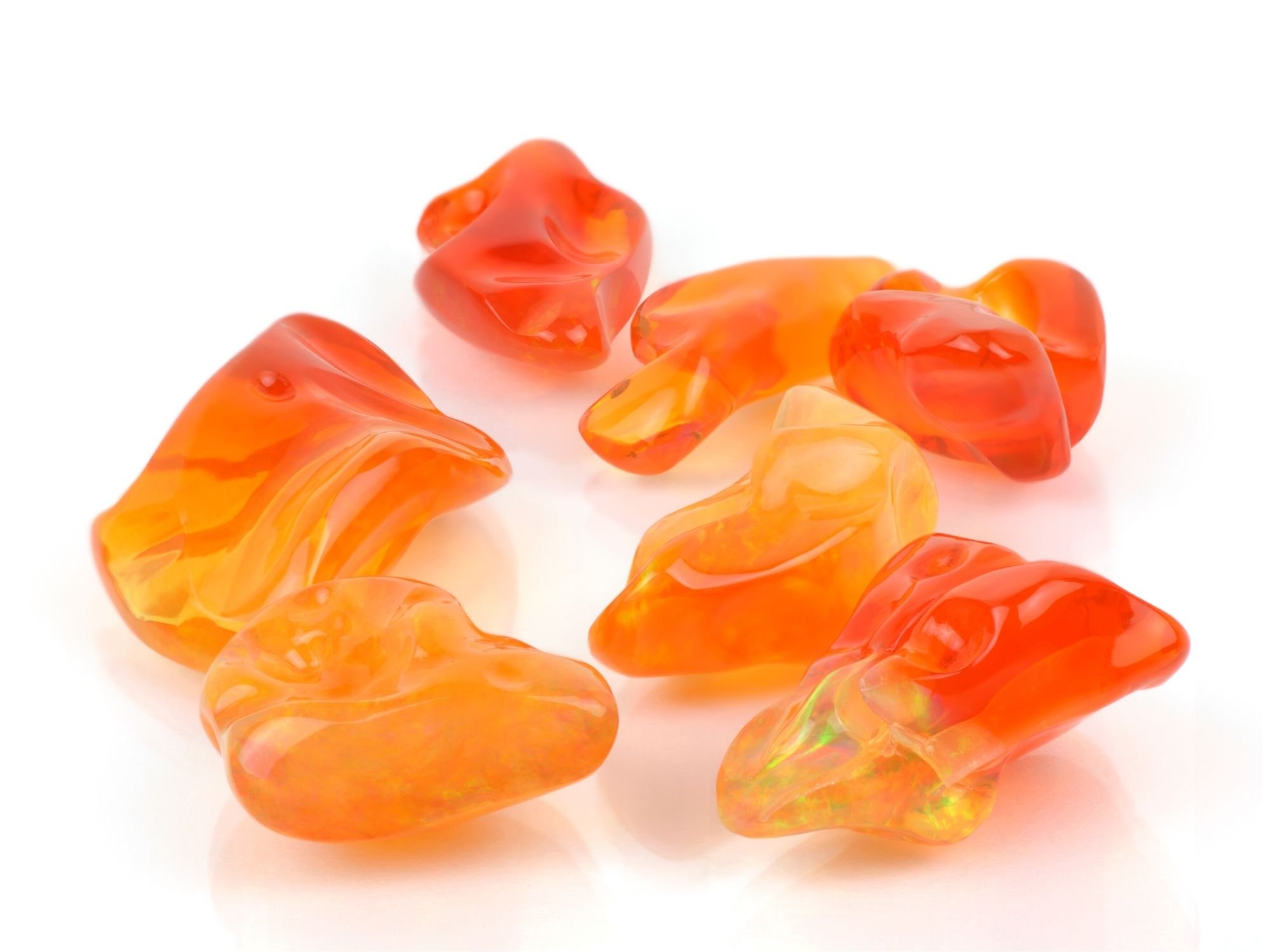 The colour range of fire opals is quite wide, and some species display several colours within a single stone. They look exceptionally beautiful when viewed in daylight after sunrise or just before sunset.

Fire opals come from yellow to vivid orange and from red to almost brown. The golden yellow gems are highly regarded; however, the most sought-after fire opals exhibit saturated orange and orange-red colour combinations.

It is worth mentioning that darker varieties typically show more play-of-colour than yellow (golden) coloured ones. The stones with a saturated orange colour are more expensive than those with a pale orange hue. Besides, the gems that have higher brilliance are always more valuable than gems with duller hues. As a general rule, the more intense the hue of an opal, the more valuable it is.

Unlike other opal varieties, good quality fire opals can be transparent to translucent. The stones that have fewer internal flaws look clean and are more valuable than included gems that tend to have a cloudy appearance.

Perfectly clean fire opals are rare. It is natural for a stone to have some inclusions, but you should avoid gems that have cracks, as these flaws can put the integrity of the gemstone at risk. It is best to choose the stones that look clean to the naked eye and whose tone is as even as possible. 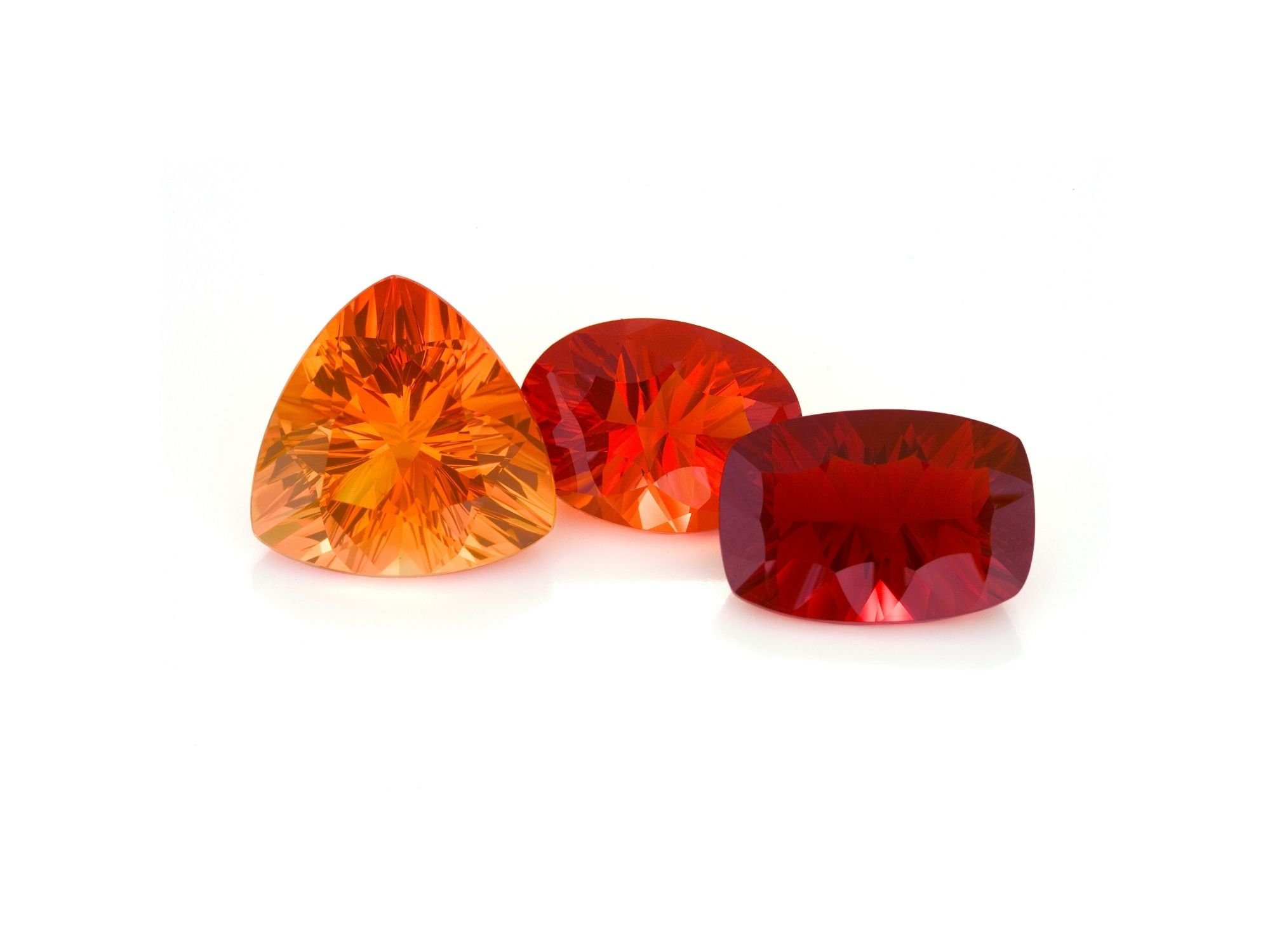 Since fire opals can be transparent to translucent, you can often find higher-grade gems faceted instead of being cut into a cabochon shape. The most popular fire opal shapes are traditional ovals, rounds, cushions and pears.

Darker varieties such as brown fire opals are often cut into cabochon to maximize their play-of-colour.

In case you are considering a faceted stone, keep in mind that opal is a relatively soft gemstone (5.5 to 6.5 on the Mohs scale), and the edges of its facets will become less sharp with time, depending on how often you wear the gem.

Opals including fire opals are delicate gemstones since they have a high level of water content. In fact, the water content can make up to 21% of their weight. This is the reason why opals are vulnerable to dehydration and temperature fluctuations, meaning if an opal is allowed to dry, it will crack and even fade.

It is very important to properly store your gemstone to protect it from drying out. That is why it is recommended to place a moist cloth inside a sealed plastic bag along with the fire opal.

Since fire opals are relatively soft gemstones, they are prone to scratching. Simply wiping the dust off the opal will gradually reduce its original polish. That is why it is recommended to rinse fire opals under warm water and dry them with a soft cloth.

Needless to say, you should never use bleach and other chemicals or put your gemstone into an ultrasonic cleaner as the vibrations will cause an opal to crack.

This website uses cookies to improve your experience while you navigate through the website. Out of these cookies, the cookies that are categorized as necessary are stored on your browser as they are as essential for the working of basic functionalities of the website. We also use third-party cookies that help us analyze and understand how you use this website. These cookies will be stored in your browser only with your consent. You also have the option to opt-out of these cookies. But opting out of some of these cookies may have an effect on your browsing experience.
Necessary Always Enabled
Necessary cookies are absolutely essential for the website to function properly. This category only includes cookies that ensures basic functionalities and security features of the website. These cookies do not store any personal information.
Functional
Functional cookies help to perform certain functionalities like sharing the content of the website on social media platforms, collect feedbacks, and other third-party features.
Performance
Performance cookies are used to understand and analyze the key performance indexes of the website which helps in delivering a better user experience for the visitors.
Analytics
Analytical cookies are used to understand how visitors interact with the website. These cookies help provide information on metrics the number of visitors, bounce rate, traffic source, etc.
Others
Other uncategorized cookies are those that are being analyzed and have not been classified into a category as yet.
SAVE & ACCEPT
Powered by