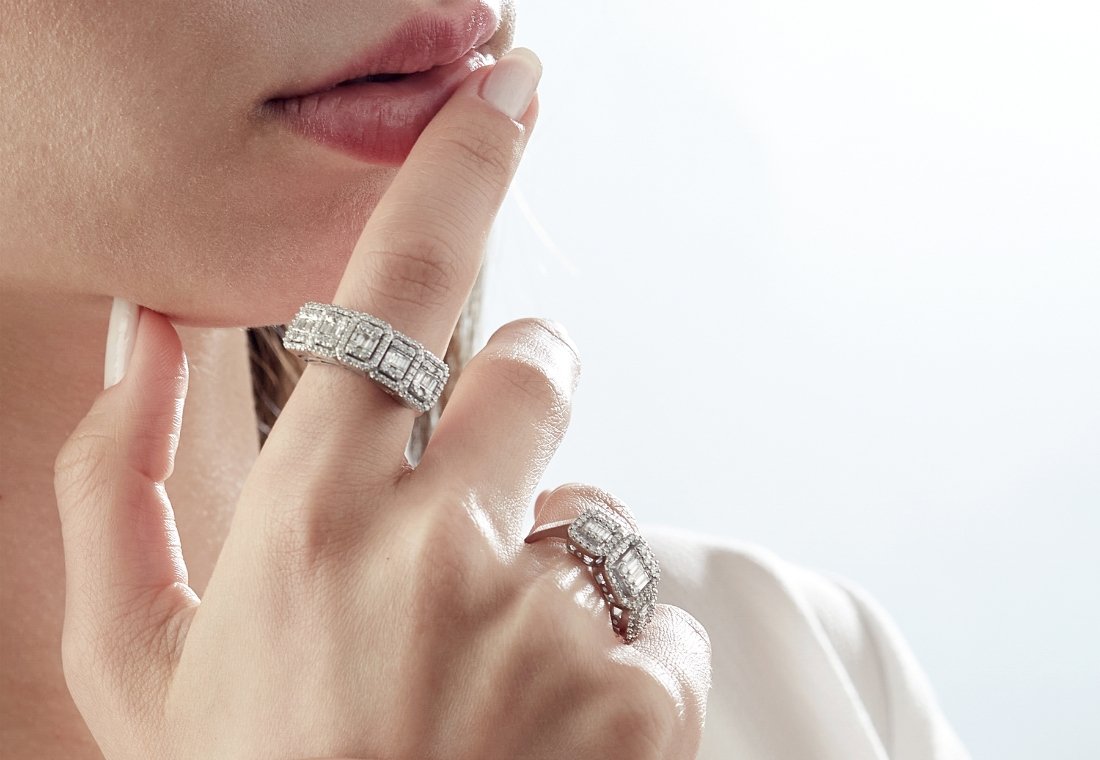 What Is an Anniversary Ring?

An anniversary ring, also known as an anniversary band, is a type of jewellery that symbolizes a milestone in the relationship. It usually features a ring made of precious metals accented with diamonds or other gemstones. However, an anniversary ring can also be a solid gold or platinum band.

Anniversary bands are usually given to celebrate the wedding anniversary milestones, such as the 1st, 5th, 10th, 15th, etc. but are also an appropriate gift to commemorate any other milestone. It is unique jewellery that signifies how far you have come together and symbolizes love and devotion. Another occasion to give an anniversary ring is if you are renewing your vows. For an extra dose of sentimentality, you can match the number of stones in your band to represent the number of years spent together.

There are several ways to wear an anniversary band, such as stacking it with your engagement and wedding rings or wearing it on your right ring finger. However, you can wear it on either hand and on any finger, so it is entirely up to your taste.

How to Choose the Style of an Anniversary Ring

The first thing to consider when choosing an anniversary ring is its style and design. Anniversary rings can be either solid or accented with diamonds or other gemstones.

In case you opt for a plain band, you can choose it in the same metal as your wedding band or in an alternative metal to add some interesting contrast. If you consider a diamond or gemstone ring, you should decide on the number of gems, their size and arrangement. In general, if you opt for larger gemstones, make sure they are of high enough quality.

It is worth mentioning that, nowadays, any eternity ring can be used as an anniversary ring. However, traditional anniversary bands feature diamonds on the front part of the band alone, which is the main difference between anniversary and eternity rings.

How to Choose Diamonds for an Anniversary Ring

Although there are specific gemstones recommended for each anniversary year, there are no absolute rules when it comes to anniversary bands. You may ask your partner what they want to receive or opt for a classic diamond anniversary ring.

When choosing diamonds for an anniversary ring, it is recommended to opt for stones that do not look visibly yellowish when set in the band. This does not mean you need to buy top colour grade diamonds. Choose stones that are colourless enough not to spoil the overall appearance of the ring. Also, pay special attention to the consistency of the colour in a setting, or the dramatic differences in colour grades might look like darker and brighter patches.

The metal of the setting is another important factor when deciding on the diamond colour grade. If you choose yellow or rose gold, you can pick diamonds in a lower colour range as the colour of the setting will mask the yellowish tints in the stones. With white gold or platinum, you need to choose diamonds in a higher colour range. This way, you can be sure that visible yellow hues will not stand out when set in white metals.

If you opt for an anniversary band with larger diamonds, make sure its stones do not have visible inclusions. Larger diamonds are more visible, and it is easier to spot flaws in them. That is why you should pay special attention to the clarity of the stones. It is not necessary to choose the highest clarity grade as it will not make much of a difference. You simply need to reach a clarity level that looks clean enough.

When choosing an anniversary ring, it is important to review the cut quality of the diamonds and ensure they are of a high standard. When reviewing diamonds, make sure the stones have a good amount of brilliance. This is especially important for larger diamonds. Make sure such stones are well cut and have a cut grade of at least “Good”. Diamonds graded lower tend to be significantly less brilliant and sparkly.

The carat weight of the individual diamonds varies depending on the design of the anniversary ring. The choice is up to your personal preferences and budget. The only thing to remember is that the larger the diamonds in a band, the more expensive it is.

How to Choose a Setting for an Anniversary Ring

The choice of a setting type for gemstones in an anniversary band depends on the metal and the design of the mounting.

Like other jewellery types, there is no “best” metal for anniversary rings. The type and colour of metal – typically yellow gold, rose gold, white gold or platinum – is based primarily on your personal preferences.

The only thing to remember is that anniversary rings are designed for everyday wear, meaning the metal used should be durable. Both 14k and 18k gold in all colours, together with platinum, are a perfect choice. Just keep in mind that white gold rings need occasional replating, which platinum rings do not.

Anniversary bands are commonly available in a prong, channel, bezel, pavé, bar and flush setting. In case you are planning to pair the band with your engagement or wedding ring, try to match its setting style as closely as possible to your existing rings.

It is important to understand that much of what you are paying for in an anniversary ring is the jeweller’s craftmanship and the setting style. That is why these two factors have a great effect on the beauty and quality of the ring.