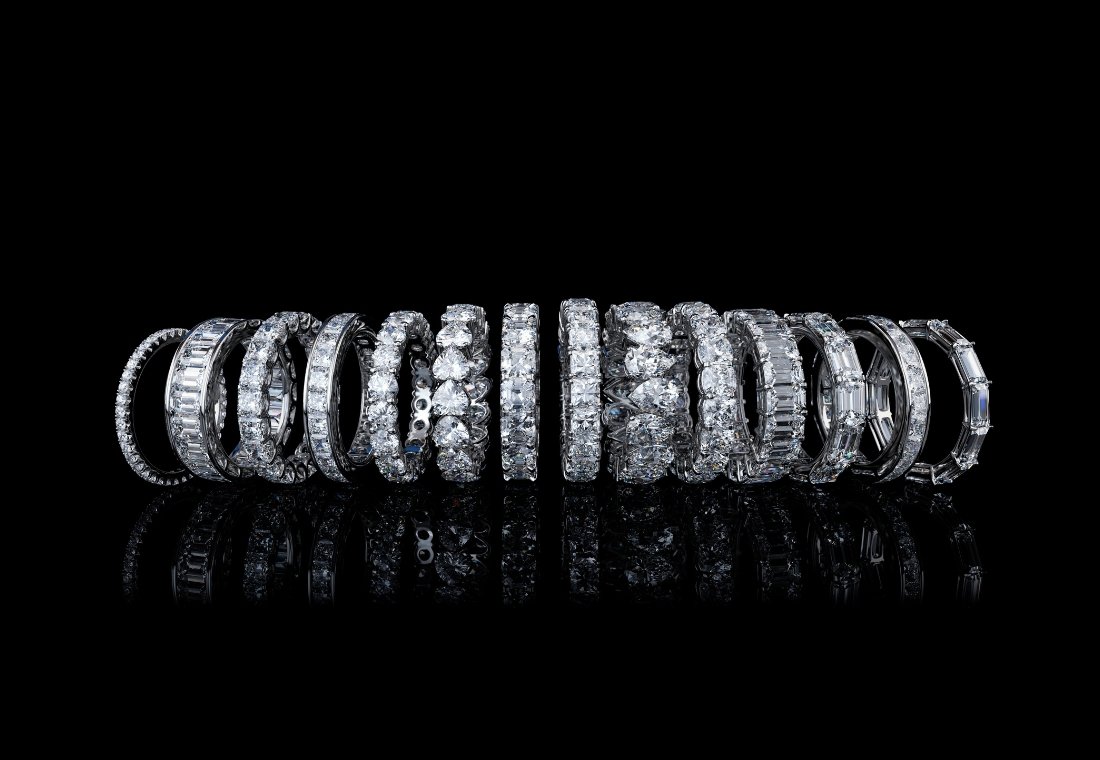 An eternity band symbolizes one person’s ultimate commitment to another. Let’s see what eternity bands look like, where they come from, how to buy them and when you should give or receive one.

What Is an Eternity Band?

An eternity band, also known as an eternity ring or infinity ring, is a type of jewellery usually made of precious metals set with a complete loop of diamonds or other gemstones. The loop of stones encircling the band has no beginning and end and symbolizes never-ending love.

Since it is not always practical to have stones covering the entire ring, sometimes the stones are set across only the face of the ring. These styles are called half-eternity bands/rings. The sentiment of a half-eternity band is still the same.

No matter the style of the ring, eternity bands are traditionally worn on the ring finger of the left hand. However, today there is no “right” finger for an eternity ring, meaning you can wear it on any finger you like.

Eternity rings are usually given as gifts to celebrate a milestone in a marriage or other relationship, which is why they are commonly known as anniversary gifts. Other significant occasions to present an infinity ring are birthdays, the birth of a child, major promotion or retirement, Valentine’s Day, Christmas and other holidays.

Historians believe that eternity rings originated in Ancient Egypt, as early as 2000 – 1800 BC when the circle was a very powerful symbol representing eternity.

Archaeologists have found ancient Egyptian eternity rings made of braided reeds, carved bone and metal. These rings had carvings, beads and even gems featured around the band. Although these rings were not given to mark special occasions we are used to celebrating nowadays, Egyptian men would give their wives such rings to symbolize their commitment and love.

Interestingly the precursors to modern eternity rings were called “keeper” rings and were not associated with celebrations until the 18th century. The keeper ring was either a single band or a pair of rings worn on the outside or on either side of the wedding ring to protect it from damage or loss. Most commonly, keeper rings were plain bands, but around the middle of the 18th century, they appeared set with a single row of matching gemstones. The fashion for eternity rings was encouraged when King George III gave Queen Charlotte a diamond keeper ring in 1761.

In 1866, after the discovery of significant diamond deposits in  South Africa, diamonds were widely used to embellish eternity rings, and as a result of powerful marketing campaigns, what we know as an eternity ring has become very popular.

Evaluating the Quality of an Eternity Ring

When it comes to evaluating the quality of an eternity ring, you should consider three important aspects: the diamonds, the setting and the precious metal used.

With no diamond certification, it is important to review the quality of diamonds and ensure they are of a high standard. When reviewing diamonds yourself, make sure the stones have a good amount of brilliance. They should also be eye clean, meaning they should not have noticeable inclusions. To evaluate the colour, ensure the diamonds appear white in relation to the setting. Besides, check if the colour of the diamonds is consistent throughout the band.

Eternity bands are commonly available in a prong, channel, bezel, pavé, bar and flush settings. In case you are planning to pair the band with your engagement or wedding ring, try to match its setting style as closely as possible to your existing rings.

It is important to understand that much of what you are paying for in an eternity ring is the jeweller’s craftmanship and the setting style. That is why these two factors have a great effect on the beauty and quality of the ring.

Like for other jewellery types, there is no “best” metal for eternity rings. The type and colour of metal, typically yellow gold, rose gold, white gold or platinum, is based primarily on your personal preferences.

The only thing to remember is that eternity rings are designed for everyday wear, meaning the metal used should be durable. Both 14k and 18k gold in all colours, together with platinum, are perfect for infinity rings. Just keep in mind that white gold rings need occasional replating, which platinum rings do not.