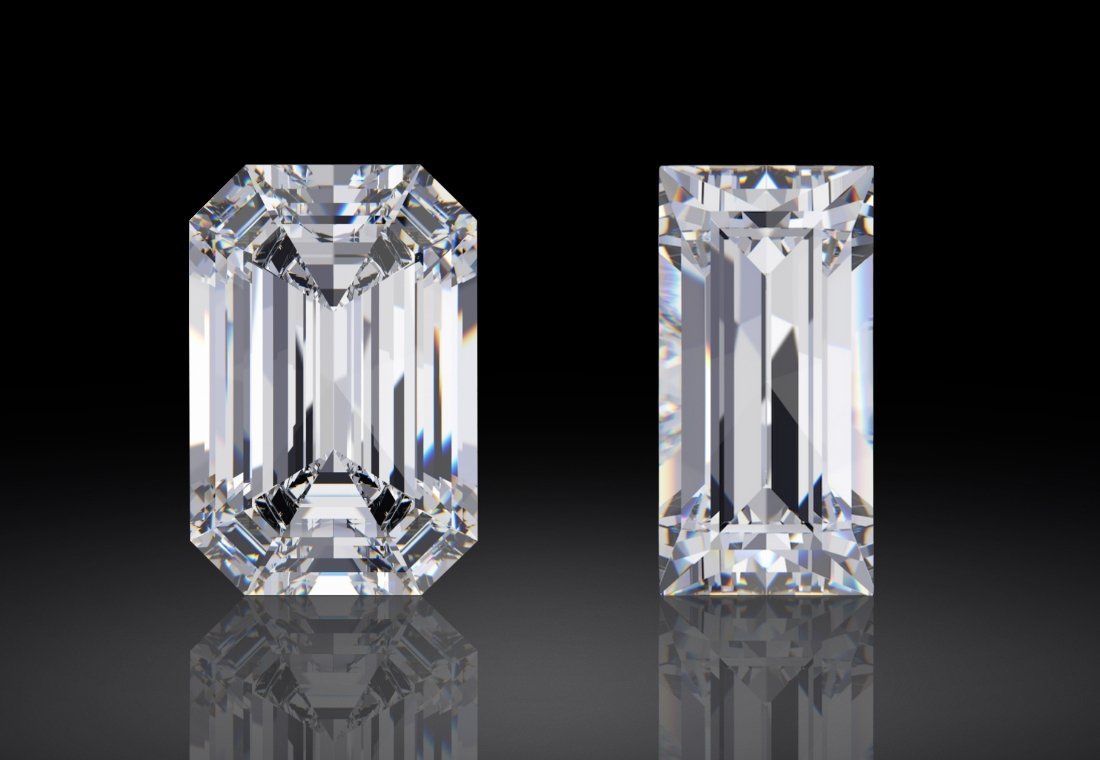 What Is an Emerald Cut Diamond?

The emerald cut is one of the oldest diamond shapes, with origins tracing back to the 1500s.

Initially crafted for emerald gemstones, it was applied to diamonds as the step-cut facet arrangement was reducing the pressure during the cutting process and preventing chips in the gems.

Emerald cut diamonds are prominent in a rectangular shape with cropped corners; however, they are available in a square shape as well. They typically feature 57 facets parallel to each other and the stone’s girdle. The emerald cut is less fiery than the brilliant cut as it is not fashioned to maximize the gem’s fire, brilliance and scintillation. This cutting technique is meant to emphasise the stone’s clarity. However, it is worth mentioning that the emerald cut emits wider and more dramatic flashes of light than the brilliant cut.

The term emerald cut was not used until the 1920s, when the cut increased in popularity. During the Art Deco period (1908 to 1935), where clean lines and symmetry were admired, the emerald cut became a huge trend. Since then, emerald cut diamonds have been among the most popular choices for engagement rings and other jewellery pieces.

What Is a Baguette Cut Diamond?

The modern history of the baguette cut traces back to the early 20th century when the cut was reintroduced for diamonds by Cartier in 1912.

The cut got its name from the French “bague”, which currently translates as a ring. However, until the 17th century, the term was referred to any jewellery in general, meaning the diminutive “baguette” translates as “small jewel”. The word “baguette” was not used to refer to a diamond cut until the early 20th century until the geometric designs of Art Nouveau and Art Deco movements influenced the development of the baguette cut.

The modern baguette cut is a variation of the table cut and features an elongated rectangular shape with straight or tapered edges. The classic step-cut baguette features 14 facets.

The baguette cut is usually used for accent stones, frequently seen in three-stone ring designs. Recently the baguette cut has become a beautiful alternative to traditional diamond cuts working as a centre stone for those looking for a unique and minimalist appearance.

Like many other diamond cuts, emerald cut and baguette cut diamonds may look similar at first glance. They both have a step facet pattern and an elongated rectangular shape. However, at a closer look, the difference in design becomes apparent.

An emerald cut diamond has cropped corners that give it an angular shape, while a baguette cut diamond features sharp edges giving it a more geometric appearance.

From a durability perspective, the baguette cut is more prone to chipping, especially if the diamond has inclusions close to its sharp corners.

Both emerald and baguette cut belongs to the step-cut group. They have large tables, and their facets are arranged to emphasise the stone’s clarity. However, the emerald cut is known for creating a “hall of mirrors” effect, making the facets appear endless as they approach the middle of the diamond.

The distinction is caused by the difference in shape and number of the facets. The emerald cut has 57 facets, while the baguette features only 14.

Even though both emerald and baguette cuts belong to the step-cut group, the emerald cut diamonds exhibit a stronger amount of brilliance and sparkle compared to the baguette cut diamonds.

The difference in brilliance is caused by the number of facets that determine how light enters and exits the diamond. The more facets, the more brilliance. However, neither emerald nor baguette can compete with brilliant cuts in terms of brilliance as the brilliant cut facet arrangement is designed to maximize a stone’s fire, brilliance and scintillation.

Diamond brilliance directly affects colour. If you compare two diamonds with visible yellowish tints, the more sparkly diamond will look less coloured as the higher level of brilliance makes the colouration less noticeable. Since emerald cut diamonds exhibit more brilliance and sparkle, they have an advantage over baguette cut stones.

Emerald and baguette cuts are also a little different in how visible their flaws are. Both cuts feature open tables making inclusions in them easily seen. However, the emerald cut diamonds exhibit a higher level of brilliance, meaning the flaws in them will not be that visible as in baguette cut diamonds if both stones have the same size and clarity grade.

This website uses cookies to improve your experience while you navigate through the website. Out of these cookies, the cookies that are categorized as necessary are stored on your browser as they are as essential for the working of basic functionalities of the website. We also use third-party cookies that help us analyze and understand how you use this website. These cookies will be stored in your browser only with your consent. You also have the option to opt-out of these cookies. But opting out of some of these cookies may have an effect on your browsing experience.
Necessary Always Enabled
Necessary cookies are essential for the website to function properly. This category includes cookies that ensure the basic functionalities and security features of the website. These cookies do not store any personal information.
Functional
Functional cookies help to perform certain functionalities like sharing the content of the website on social media platforms, collecting feedbacks, and other third-party features.
Performance
Performance cookies are used to understand and analyse the key performance indexes of the website, which help in delivering a better user experience for the visitors.
Analytics
Analytical cookies are used to understand how visitors interact with the website. These cookies help provide information on metrics the number of visitors, bounce rate, traffic source, etc.
Others
Other uncategorized cookies are those that are being analysed and have not been classified into a category as yet.
SAVE & ACCEPT
Powered by