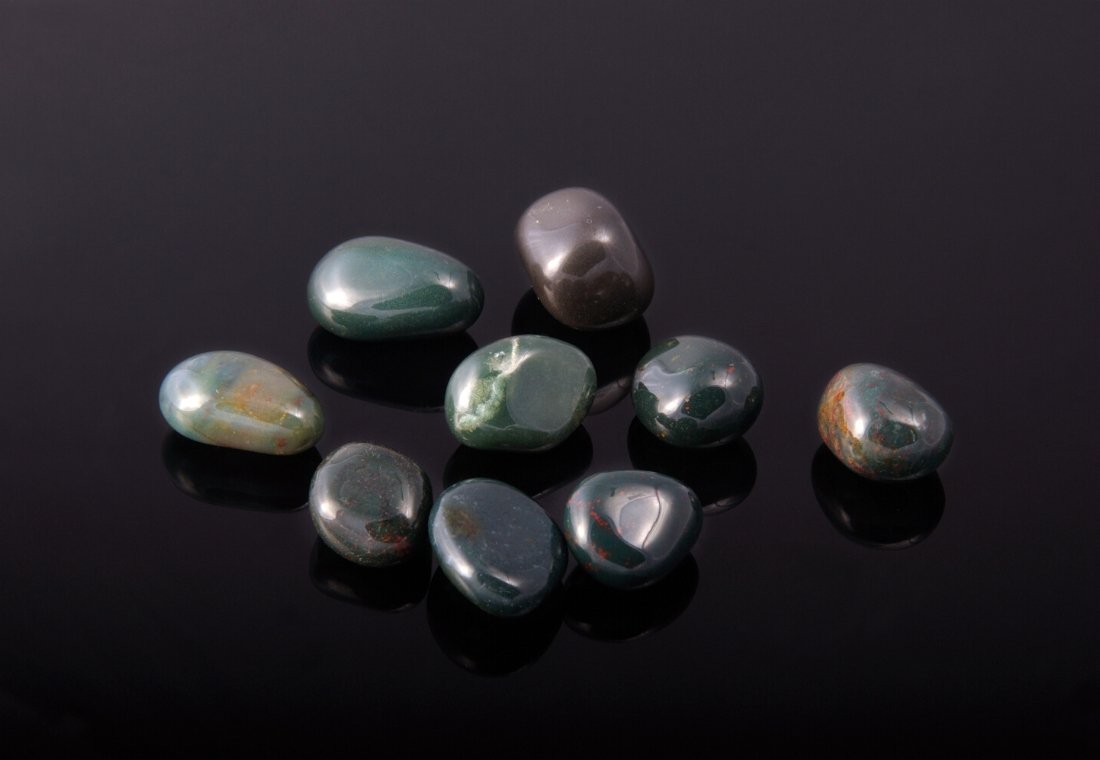 Bloodstone, the traditional birthstone for March, is one of the first gemstones used by man. Popular in dome shapes, bloodstone is a historical gem ideal for contemporary jewellery designs at an affordable price.

Bloodstone, also known as heliotrope, is a dark green variety of chalcedony containing orangy-red inclusions of iron oxide that resemble drops of blood. The legend has it that the splatter of red in the dramatic-looking green gemstone represents the blood of Jesus. According to it, the first bloodstone was formed when drops of Christ’s blood fell and stained green jasper at the foot of the cross.

Bloodstone, similar to many other gemstones, formed when magma (hot molten rock) rose to the surface crust of the earth and began to cool. During its hardening process, gas bubbles formed, and cavities where magma flowed cooled at different rates. Once magma hardened into rock and gasses escaped, leaving pockets of space, the hollow areas filled with silica, rich in dissolved quartz molecules.

The green body colour of bloodstone is created by the presence of chlorite and amphibole during the gem crystallized in the ingenious rocks. The vibrant red spots are caused by the iron oxide impurities trapped within the stone during its formation process.

Bloodstone is found worldwide, with the best species and largest quantities coming from Australia, Brazil, India, Madagascar and the United States.

Bloodstone is one of the few gemstones that come in a single colour with different shades. The body colour of the bloodstone is deep dark green caused by the presence of chlorite and amphibole during its formation process. Since the presence of these minerals can vary in quantity, the background colour can also vary in shade and even be inconsistent throughout the gemstone.

The orangy-red spotting is caused by iron oxide inclusions, such as hematite, trapped within the stone during its crystallization. Some bloodstones may have few or no red spots. Such specimens are not considered valuable.

Clarity is the degree of transparency or lack of incisions and blemishes in a gemstone. The higher the clarity grade, the more expensive the stone. However, the bloodstone is a unique gem and differs from these rules.

Bloodstone is an opaque gemstone, meaning it does not allow light to pass through. Its opacity is caused by inclusions of actinolite or hornblende needles. This is why bloodstone is nearly always cut into dome shapes known as cabochons; however, it can also be faceted and carved. Bloodstone can have round, oval, pear and square outlines, ideal for unique jewellery designs. The smooth domed cut also enhances the silky polish and sheen of the gem, one of the most attractive features of bloodstone.

Bloodstone is a relatively scratch-resistant gemstone, 6.5 to 7 on the Mohs Hardness scale; however, it is recommended to take special care to prevent damage. Remember to remove your bloodstone jewellery before physical activities or household cleaning to prevent it get damaged by other harder materials and surfaces.

When storing bloodstone jewellery, keep it separated from other softer gemstones to protect them from being scratched. Similarly, you will want to protect your bloodstones from harder gemstones, such as diamonds and sapphires. This means it is a good idea to store bloodstones in individual cloth jewellery bags.

To clean bloodstones at home, use mild dishwashing soap and warm water. Soak your jewellery for about 10 – 15 minutes and use a soft toothbrush to remove the dirt. Next, rinse out your piece with clean water and dry it with a soft and lint-free cloth. Ultrasonic and steam cleaners are not recommended.