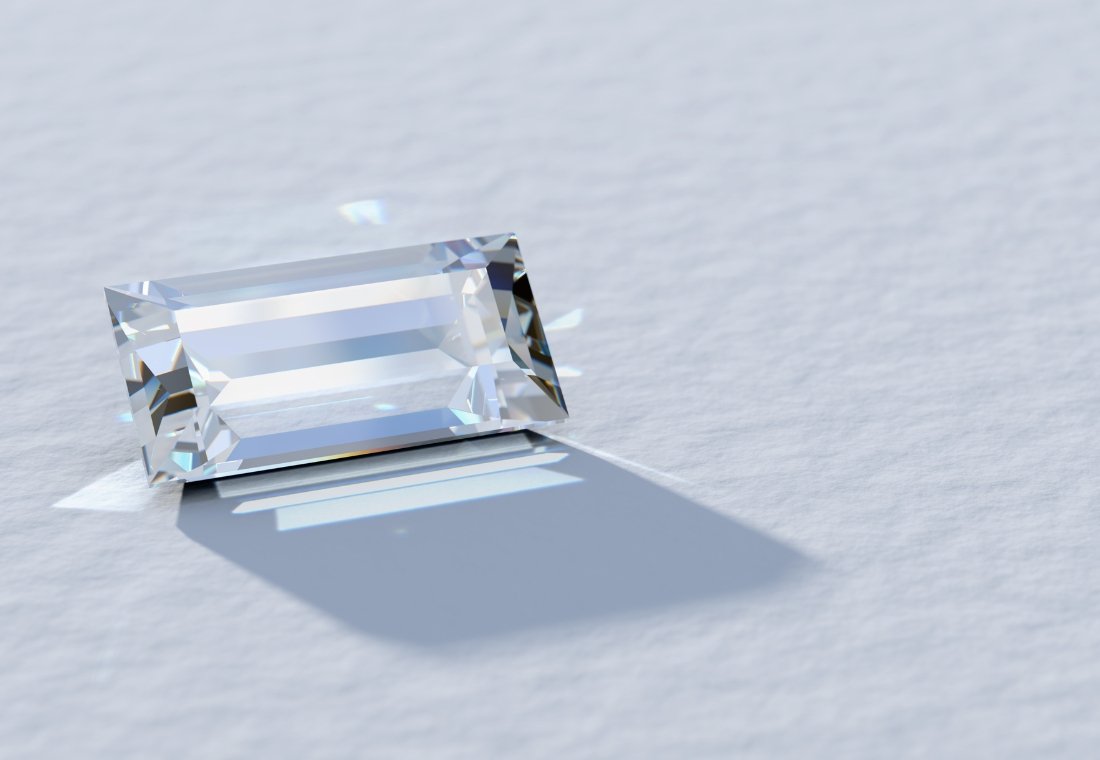 The baguette is a popular cut for accent stones in many jewellery designs. It is also a beautiful alternative to traditional diamond cuts working as a centre stone for those looking for personalization. If you are interested in buying a diamond with a unique shape and symmetry, this baguette cut diamond guide is a must-read.

Although the baguette cut features a contemporary minimalist design, its modern history traces back to the early 20th century when it was reintroduced for diamonds by Cartier in 1912.

Historically, elongated rectangular cuts from which the modern baguette cut is derived have been seen in jewellery on paintings since the mid-16th century. However, these cuts were presented under the names Hogback and Dos d’âne.

The cut got its name from the French “bague”, which currently translates as a ring. However, until the 17th century, the term was referred to any jewellery in general, meaning the diminutive “baguette” is translated as “small jewel”. The word “baguette” was not used to refer to a diamond cut until the early 20th century when the geometric designs of Art Nouveau and Art Deco movements influenced the development of the baguette cut.

The baguette cut is usually used for accent stones, frequently seen in three-stone ring designs. However, recently the baguette cut has become a beautiful alternative to traditional diamond cuts working as a centre stone for those looking for a unique and minimalist appearance.

How to Choose Baguette Cut Diamonds

When choosing baguette diamonds as accent stones, the most important thing is to match their colour to the centre diamond. If you are going to place a step cut baguette next to a brilliant cut, it is recommended to opt for at least one colour grade higher. Step cut diamonds are known to highlight tints, so you should make sure there is no noticeable colour difference between the stones. At the same time, the side stones should not have a colour grade that high to overshadow the centre diamond.

The baguette is a step cut; it emphasizes the stone’s clarity, meaning its imperfections tend to be more visible. However, these diamonds used as side stones are typically small, meaning you do not need to opt for the highest clarity grade. In most cases, an eye-clean appearance is enough.

Pay special attention to the symmetry and polish of the stones. The parallel facets of the baguette cut should have the same shape and size. All the points of the facets should meet, and there should not be missing or extra ones. The more symmetrical the facets, the more beautiful the stone. Also, it is worth making sure the diamonds are not too shallow because a too spready cut will diminish the beauty of the stones.

Baguette cut diamonds are usually purchased in sets. For this reason, apart from the colour and clarity, they should also match in dimensions. For classic straight baguettes, you should specify the length and width to 0.1 millimetres. For tapered baguettes, match the stones by their length as well as the wide and narrow ends. In other words, the stones should have equal dimensions and not equal carat weights.