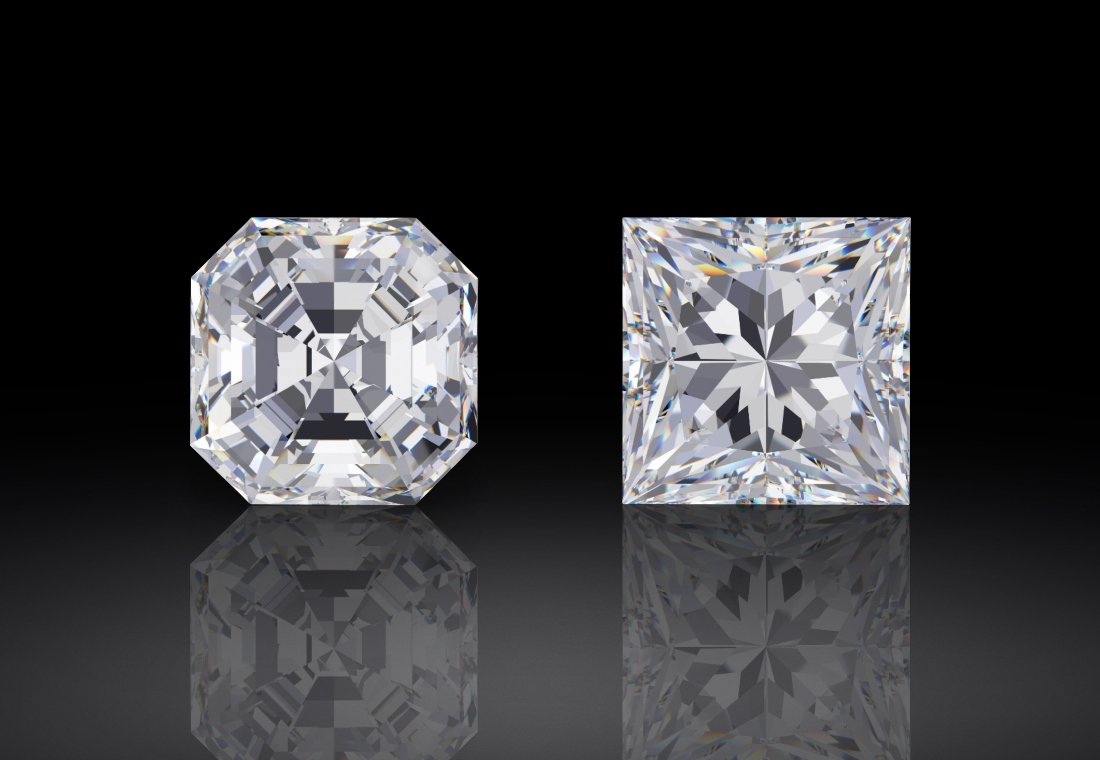 Diamond buyers often compare Asscher and princess cuts when they think of a square-looking diamond. Although these two cuts share some traits, several features set them apart. Let’s discover the differences between Asscher cut vs princess cut diamonds and see what aspects to consider when choosing between the two.

What Is an Asscher Cut Diamond?

The name of the Asscher cut originates from I.J. Asscher Diamond Company, established by Joseph Isaac Asscher in Holland in 1854.

The Asscher cut was created in 1902 by Joseph Isaac Asscher, the grandson of the founder. This was the world’s first patented diamond cut protected from replication. The Asscher Diamond Company held its exclusive patent until World War II and saw extremely strong sales internationally, especially during the Art Deco period. The peak in popularity in the 1920s is one of the reasons people see Asscher cut diamonds as antique and vintage.

Although the Asscher cut looks similar to the square emerald cut, Joseph Asscher modified certain criteria, so Asscher cut diamonds produce more brilliance than emerald cut diamonds. These criteria include larger step facets, a smaller table and a higher crown, which result in a signature look and more carat weight.

The original Asscher cut diamond features 58 step cut facets and an octagonal square shape with an ideal length to width ratio from 1 to 1.04.

What Is a Princess Cut Diamond?

The history of the princess cut traces back to the early 1960s when Arpad Nagy, a diamond cutter based in London, created the profile cut, which was often referred to as the princess cut at the time.

However, many believe that the true princess cut traces its roots in 1971 when Basil Watermeyer patented a new diamond shape and called it Barion cut. Being a very complex cut, Barion proved to be extremely difficult to create. Incredibly symmetrical lines were challenging even for the expert diamond cutters.

Nearly ten years later, another cut similar to the Barion was patented and named Quadrillion. The Quadrillion cut gained some popularity as it was easier to create due to its use of 49 facets compared to the 80 facets of the Barion.

The modern princess cut is a relative newcomer to the diamond world. It was created in 1981 by Betzalel Ambar, Ygal Perelman and Israel Itskowitz. A princess cut diamond can have as few as 50 facets, but the number of facets is often modified (up to 144) to maximize brilliance and sparkle. The “gold standard” is 58 facets.

Although the princess cut is usually described as a square shape with sharp corners, the shape of the cut is closer to an inverted pyramid; however, it can also come in tapered and rectangular shapes.

Like many other diamond cuts, the Asscher and princess cut diamonds may look similar at first glance. However, at a closer look, the difference in design becomes apparent.

From the durability perspective, the princess cut is more prone to chipping, especially if the diamond has inclusions close to its sharp corners.

The step cut stones feature parallel facets, which give them a clean and sleek look, making it easier to see their pattern. For this reason, it is important to purchase Asscher cut diamonds with higher clarity and colour grades.

In comparison, the brilliant cut stones have more fire, brilliance and scintillation, but their facet pattern is not that easily distinguishable for an untrained eye.

Since the princess cut belongs to the brilliant cut group, its facets are arranged to maximize a stone’s brilliance and sparkle. In classic Asscher cut diamonds, facets are not cut with this goal in mind. They are cut to emphasize the stone’s clarity, but they also tend to have wider and more dramatic flashes of light.

It is worth mentioning that not all princess cut diamonds have the same level of brilliance. The classic princess cut stones exhibit less sparkle than modified variations. The same is true for the Royal Asscher cut, which exhibits an excellent amount of brilliance due to the higher number of facets.

Since princess cut diamonds belong to the brilliant cut group, they exhibit more brilliance and sparkle, having an advantage over Asscher cut stones, which tend to show visible colouration.

The difference in brilliance between the Asscher and princess cuts also leads to the difference in the visibility of their flaws. Since the princess cut diamonds show more sparkles, their inclusions are less visible than those in Asscher cut diamonds of the same clarity grade. That is why if you are considering an Asscher cut diamond, you will want to pay special attention to the size and location of its inclusions.