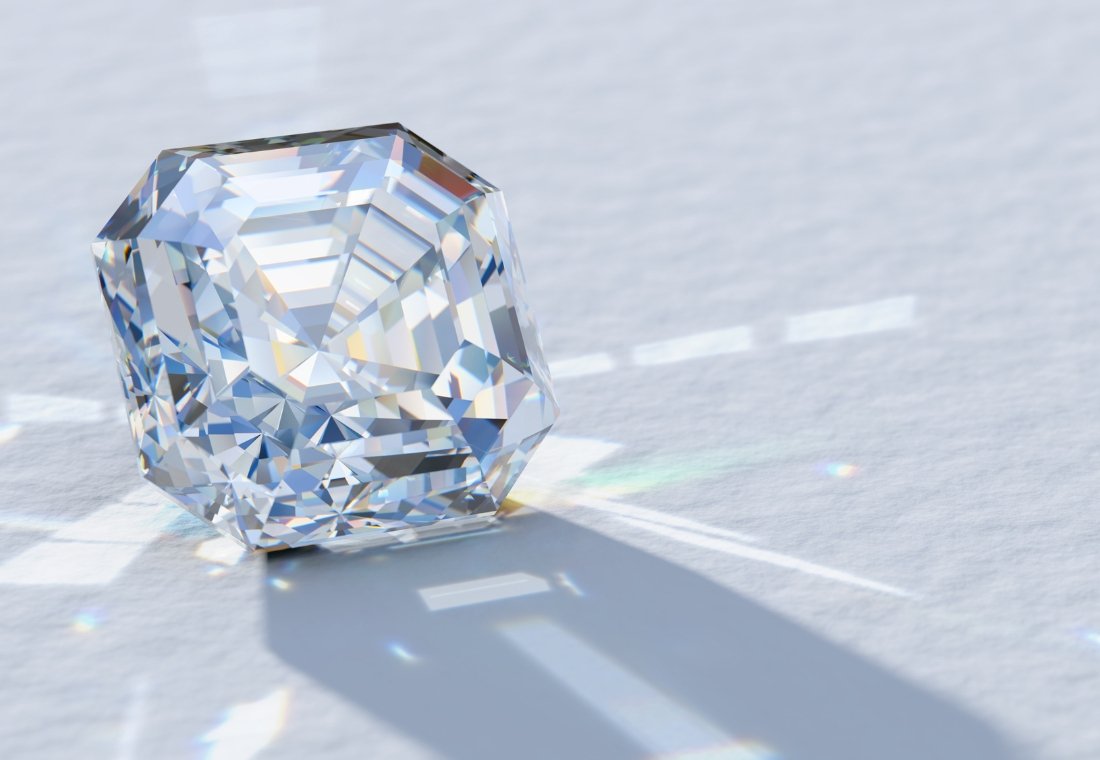 A hundred years after the first wave of popularity, Asscher is one of the most sought-after diamond cuts for minimalist jewellery lovers. If you are interested in buying a diamond with a clean and sleek design, this Asscher cut diamond guide is a must-read.

The name of the Asscher cut originates from I.J. Asscher Diamond Company, established by Joseph Isaac Asscher in Holland in 1854.

The Asscher cut was created in 1902 by Joseph Isaac Asscher, the grandson of the founder. This was the world’s first patented diamond cut protected from replication. The Asscher Diamond Company held its exclusive patent until World War II and saw extremely strong sales internationally, especially during the Art Deco period. The peak in popularity in the 1920s is one of the reasons people see Asscher cut diamonds as antique and vintage.

Although the Asscher cut looks similar to the square emerald cut, Joseph Asscher modified certain criteria, so Asscher cut diamonds produce more brilliance than emerald cut diamonds. These criteria include larger step facets, a smaller table and a higher crown, which result in a signature look and more carat weight.

The original Asscher cut features 58 step cut facets and an octagonal square shape with an ideal length to width ratio from 1 to 1.04.

While the Gemological Institute of America (GIA) and other lab entities provide cut grading for the round brilliant cut, they do not give a cut quality grade for fancy shaped diamonds, including the Asscher cut. This is because fancy shapes have many non-standardised facet structures, meaning they can be cut to a wide range of proportions. However, grading laboratories list information on polish and symmetry, which are some of the key factors in choosing a brilliant and sparkly stone.

When choosing an Asscher cut diamond, make sure to pay attention to the facets of the stone and their symmetry. The facets on the right and left halves should have the same shape. All the points of the facets should meet, and there should not be missing or extra ones. Symmetry is the key to maintaining the overall beauty of the stone.

It is also worth mentioning that Asscher cut diamonds possess a windmill pattern, which is visible due to the step cut facets on the pavilion from a top-down perspective. It is a critical component that should be seen diminishing up to the centre of the stone. If windmills end before the centre of the gem, the stone will have a poor cut and will not have a balanced look.

The colour of Asscher cut diamonds is graded on a scale from D to Z, where D signifies a completely colourless stone and Z means an easily noticeable yellow or brown tint.

Due to open step facets and a large table, Asscher cut enhances the richness of the gem’s colour, making it easier to see the natural colour of the stone. If you compare two diamonds of the same colour grade, the one with the step cut facet arrangement will have more visible colouration than the one with the brilliant facet pattern. This is because the higher level of brilliance makes the tints less noticeable. The difference is more pronounced in larger gems weighing 1.00 carats and more. Smaller Asscher cut diamonds hide colour better, but you might still need to choose a stone in the colourless range (D-E-F) to have a truly white diamond.

The chart below provides a general guideline for evaluating colour in the Asscher cut diamonds.

The GIA grades the clarity of Asscher cut diamonds on a scale from FL to I3, where FL means a flawless stone and I3 indicates a heavily included diamond.

Asscher cut diamonds have a relatively lower level of brilliance and sparkle than brilliant cut diamonds. The Asscher cut is designed with step cut facets and accentuates a diamond’s clarity, making it easier to see any flaws, especially if the inclusions are found in the middle of the stone. While SI1 clarity might be a great balance of price and appearance for the other diamond shapes, in Asscher cut diamonds, the preferable choice would be VS2 clarity grade and higher.

The chart below provides a general guideline for evaluating clarity in the Asscher cut diamonds.