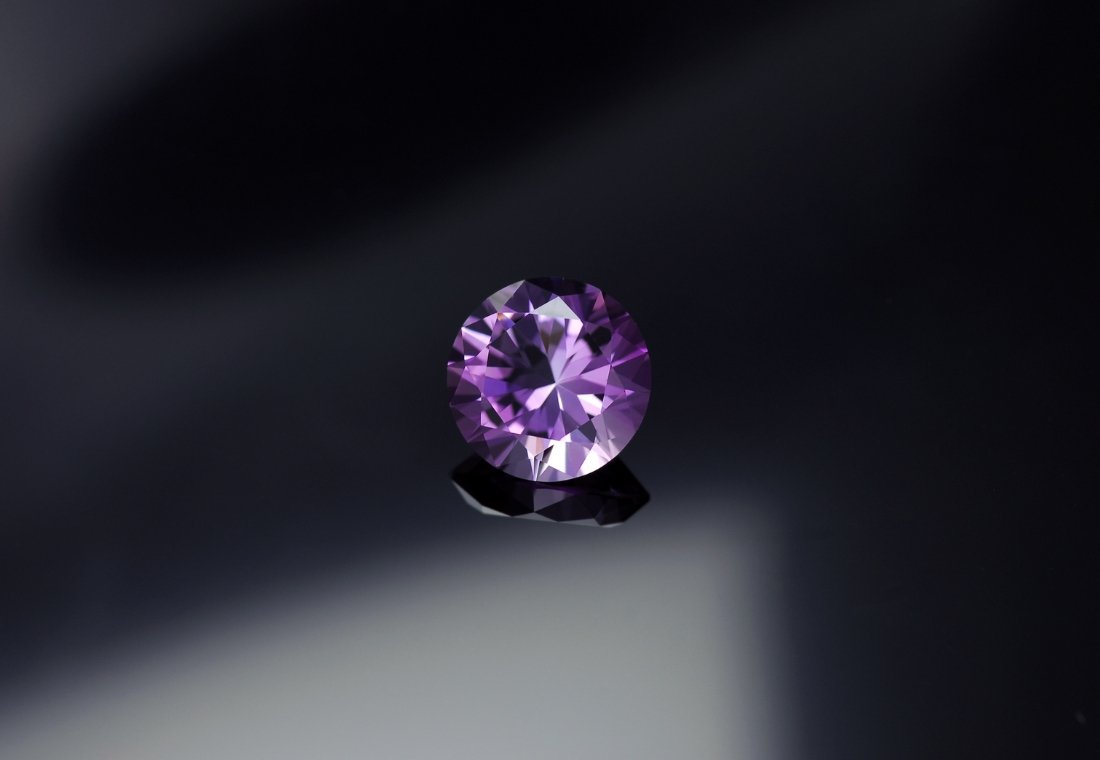 The official birthstone for February, amethyst, is the most popular and valuable form of quartz today. Not long ago, this eye-catching purple gemstone was part of the precious gemstone family considered as valuable as diamond, emerald, sapphire and ruby.

The name amethyst comes from the Greek “amethystos” meaning “not intoxicating”, as, in ancient times, it was thought that gemstones could prevent from getting drunk.

Historically, amethyst was as valuable as diamond, ruby, emerald and sapphire until the 19th century, when large deposits in Brazil were discovered. In the olden days, purple was considered a royal colour, and as it was very difficult and expensive to produce, only rich people or royalty could afford it. To produce one gram of purple dye, people needed to crush 9000 particular sea shells found only in the Mediterranean Sea. Now imagine how valuable was a naturally occurring purple crystal.

Amethyst is found inside geodes, which are geological secondary formations (hollow, vaguely spherical rocks) within sedimentary and volcanic rocks. When the outer layer of geodes hardens, it leaves space inside, which gets filled over millions of years by minerals precipitated from water, groundwater or hydrothermal fluids. In the case of amethyst, geodes are filled with silicon dioxide and trace amounts of iron, which slowly crystallize into quartzes.

Amethyst is the purple colour variety of quartz or silicon dioxide. It belongs to the same quartz family as citrine. The only difference between the two gemstones is their colour, purple for amethyst and yellow for citrine. The colour of both crystals is caused by the presence of iron. However, in cirtine, iron is a bit more oxidized.

Since amethyst and citrine are both forms of silicon dioxide, they are often found in the same location. However, it is rare for both purple and yellow colours to be found in the same crystal. When it does, the crystal is known as ametrine (amethyst + citrine).

The colour of amethyst ranges from lilac with pink undertones, lavender up to deep violet, plum and raspberry with hints of blue, red and even rich brown.

The most valuable amethysts have deep colours, with strong reddish-purple or deep purple with no colour zoning. However, too deep colours can look black in dim lighting conditions, and this diminishes their value. In general, any brownish or bronze tints or noticeable colour zoning lower amethyst value dramatically.

Siberian mines in Russia used to produce the world’s finest amethysts which featured a rich purple colour that glowed with red and blue flashes. However, today the term “Siberian” no longer refers to the origin as the Siberian mines have been exhausted. Instead, it refers to a trading name for amethysts similar to those mined in Siberia.

Another popular colour of amethyst is a pale rose or light lilac, which is known under the “Rose de France” trading name. Rose de France amethysts are mostly found in Brazil; however, there are also significant deposits in Bolivia and Zambia. With the correct cutting technique, these pale lilac semi-precious gemstones can display dramatic colour changes from red to blue when viewed from different angles (pleochroism).

Generally, amethyst gemstones are not treated to enhance their colour. Heat treatment usually reduces their natural purple colour, so it is not recommended. Occasionally very dark specimens are heat-treated to lighten the colour as very dark colours are not that sought-after. Light-coloured amethysts with the right iron content can be heat treated to produce citrine.

Amethyst is a type II gemstone meaning it usually occurs without any inclusions trapped inside during its formation process. For this reason, buyers should opt for eye-clean gemstones unless the colour is exceptionally attractive. For example, African amethysts, especially from Zambia, can have a highly saturated raspberry colour, but they tend to have more inclusions than amethysts mined in Brazil. However, due to their beautiful colour, the low clarity of Zambian amethysts is considered acceptable.

Rarely, amethyst undergoes fracture-filling to improve the clarity of its surface-reaching fractures. Heavily-included amethysts with attractive colours are usually cut into cabochons or beads.

Since amethyst is a hard crystal (7 on the Mohs scale), it can be cut and faceted into almost any shape, including rounds, ovals, pears, emeralds, triangles and others. Amethyst can also be cut into a variety of freeform shapes, which is done by hand or by automated cutting. Such fantasy shapes are used for all types of designer and mass-market jewellery as well as one-of-a-kind ornate carvings.

Amethyst is a relatively durable semi-precious gemstone, 7 on the Mohs hardness scale, meaning it is hard enough to survive accidental hits. However, you may want to take special care to prevent such abuse. That is why it is always recommended to remove your amethyst jewellery before physical activities or household cleaning.

Always remember that amethyst is sensitive to sunlight. If it is exposed to the sun for a too long period, the colour of the gem can significantly fade and this cannot be reversed. The same is true for prolonged exposure to moisture and heat.

To clean amethysts at home, add some mild dishwashing soap liquid in warm water. Stir the water and dish soap together using a spoon or your finger. Carefully place your gemstone in the liquid you have prepared and soak it for about 20 – 30 minutes. This will help to loosen any dirt. After soaking, use a soft toothbrush to remove the dirt. Next, rinse out your piece of jewellery with clean water and dry it with a soft and lint-free cloth.

When storing amethyst jewellery, keep it separated from other softer gemstones to protect them from being scratched. Similarly, you will want to protect your amethysts from harder gemstones such as diamonds and sapphires. This means it is a good idea to store amethyst in individual cloth jewellery bags.