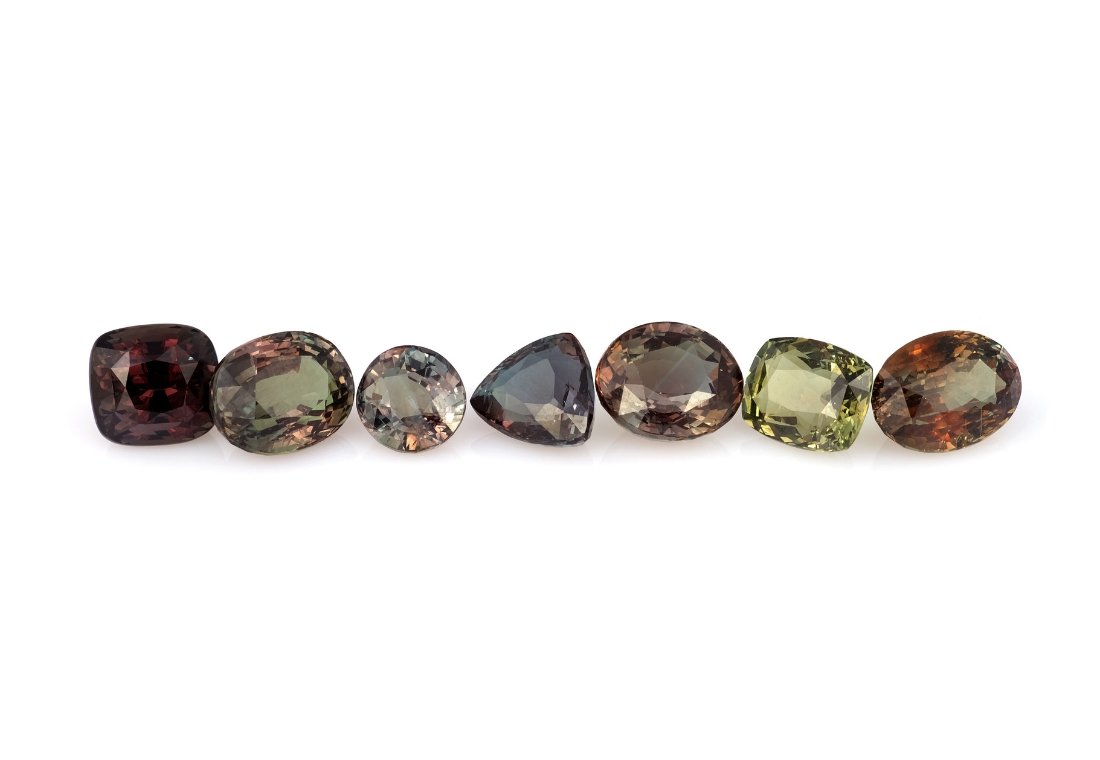 Alexandrite is a unique colour gemstone that displays an extremely rare colour transformation from green in daylight or fluorescent light to brownish- or purplish-red in the candle flame or incandescent light. Regarded as “emerald by day, ruby by night”, alexandrite is one of the three birthstones for June, along with moonstone and pearl.

Alexandrite is an extremely rare colour-changing variety of chrysoberyl mineral. It forms when aluminum and beryllium combine with elements of iron, titanium and most importantly, chromium which causes the gem’s colour to shift depending on the lighting conditions.

The history of alexandrite dates back to the times of Imperial Russia. It was discovered by a Finnish mineralogist and traveller Nils Gustaf Nordenskiöld in 1834. Alexandrite was initially thought to be an emerald as it was found in emerald mines located in the Ural region of Russia.

Receiving the mineral sample for examination from Lev Perovskii, a Russian nobleman and mineralogist who also served as Minister of Internal Affairs under Nicholas I of Russia, Nordenskiöld was confused with the high hardness of the gem, 8.5 on the Mohs scale, while emerald has a hardness of 7.5 – 8. The same evening, while looking at the gemstone under candlelight, he was surprised to discover that the stone had changed its colour from green to purplish-red.

Later, the scientist confirmed the discovery of a new variety of chrysoberyl and suggested naming it “diaphanite” (from the Greek “di” two and “aphanes” meaning appear or show). However, Perovskii had his plans. He used the gemstone to integrate himself with the Imperial family by presenting it to the future Tsar and naming the gemstone alexandrite in honour of Alexander II of Russia. Inevitably, alexandrite was declared the official gemstone of Imperial Russia’s Tsardom.

Although the Ural region in Russia was thought to be the only source of large alexandrites for quite a long time, large specimens were discovered in Minas Gerais, Brazil. Other sources for alexandrite include Madagascar, India, Tanzania, Sri Lanka and Myanmar (Burma).

The colour change in alexandrite is the result of the complex way the mineral absorbs light due to the chromium content when observed under certain lighting conditions, such as daylight or fluorescent light and candlelight or incandescent light. The colour-changing phenomenon seen in alexandrites is referred to as the “alexandrite effect”.

Commonly alexandrite exhibits an emerald green colour in daylight and purplish-red under incandescent lighting. However, it can also occur with yellowish or pink colours. Some rare specimens can even exhibit a chatoyancy effect when cut into cabochons.

Alexandrite is a strongly pleochroic gem, meaning it can display different colours when viewed from different angles. Depending on the direction the stone is viewed from, it can show green, purple-red, orange and yellow colours. However, the colour-changing properties of alexandrites are completely independent of pleochroism.

Alexandrites from Sri Lanka are known to exhibit a khaki to brown colour range. The ones from Zimbabwe usually display little colour change and typically come in darker colours with tints of purple. Tanzanian specimens tend to occur in lighter tones. Brazilian alexandrite is known for its blue-to-purplish colour change. The most valuable alexandrites are those with pure hues and a strong colour-changing effect.

Alexandrite is an eye-clean gemstone, meaning it contains few inclusions. In its rough form, it can range from transparent to opaque. Once cut and polished, alexandrite displays vitreous lustre.

Alexandrites are most commonly fashioned into traditional shapes such as round, oval, cushion, pear and marquise cuts. In case the rough material possesses chatoyancy properties, it is cut into cabochon.

The pleochroism effect in alexandrites makes it a challenge for cutters as they need to orient the gem to show the strongest colour change through the crown. It is crucial to position the rough so that the fashioned stone shows both green and purplish-red colours face-up.

Alexandrite is rarely found in large sizes. A stone weighing more than three carats is considered to be extremely rare and valuable as a result.

There is a dramatic rise in price for clean alexandrites with good colour change and strong colours, especially for stones over 1 carat in weight. Fine-quality alexandrite is considered to be more valuable than blue sapphire, emerald and ruby. The gems that exhibit chatoyancy or the cat’s-eye effect are even more valuable.

Alexandrite is a very durable semi-precious gemstone, 8.5 on the Mohs hardness scale, meaning it is hard enough to survive accidental hits. However, you may want to take special care to prevent such abuse. It is always recommended to remove your alexandrite jewellery before household cleaning, playing sports, exercising or gardening.

To clean alexandrite at home, you should add some mild dishwashing soap in warm water. Stir the water and dish soap together using a spoon or your finger. Carefully place your gemstones in the liquid you have prepared and soak them for about 10 – 15 minutes. This will help to loosen any dirt. After the soaking, use a soft toothbrush to remove the dirt. Next, rinse out your piece of jewellery with clean water and dry it with a soft and lint-free cloth.

Alexandrite can be cleaned using ultrasonic and steam cleaners; however, care should always be taken when using these methods.